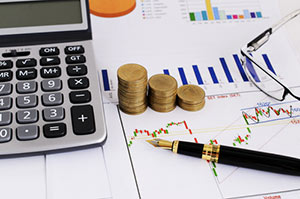 Investing in stocks looks like a daunting and difficult task right now. With the consequences of the Brexit vote looming and the S&P 500 trading near all-time highs, investors worry the markets will be volatile through the rest of 2016. The S&P 500 Volatility Index (VIX) surged 82% in June alone.

But Money Morning Chief Investment Strategist Keith Fitz-Gerald recommends one test that will make finding the best stocks to buy a simple task. It's meant to easily identify valuable stocks that can offer decades of solid returns.

Editor's Note: The single biggest event in energy history is about to happen next year. Here's everything we know – and don't know – about this $3 trillion deal…

Stocks that have scored high on this test have returned an annual average of 26.7% over the last 10 years. Even better, this test identifies the market-proof investments that yield profits no matter what happens to the Dow Jones Industrial Average or S&P 500. During the recession in 2008, stocks that passed the test climbed an average of 33%. That's when the rest of the market was falling 52%.

Make Investing in Stocks Easier with This Number 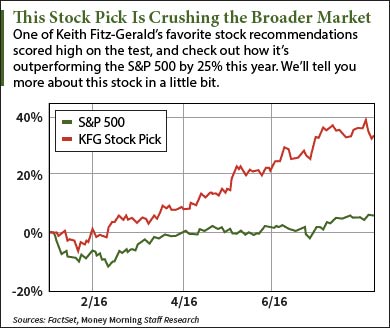 The number at the heart of this test for finding stocks to buy is the F-Score.

The F-Score – also called the Piotroski score – is a metric created in 2000 by then University of Chicago professor Joseph Piotroski. It's a score ranging from 0-9 that measures nine criteria to determine a stock's long-term value. The stock receives one point for every criteria the company passes, then the points are added up. An F-Score of nine means the company has strong financial health.

"The F-Score is one of Wall Street's best-kept secrets," Fitz-Gerald – a market analyst with over 30 years of experience investing in stocks – told Money Morning readers on Aug. 2. "Through bull markets and bear markets alike, the best companies ALL have a high F-Score."

Don't Miss This: Facebook is one of the best-performing tech stocks of 2016. But the gains won't stop here. In fact, we see FB stock gaining 100% in the next few years. Here's why…

Companies that score an eight or nine on this test are the best stocks to buy. They have fortress-like balance sheets, strong management, and rising profit margins.

Let's perform the F-Score test on one of Fitz-Gerald's favorite stocks. Shares of this company have beaten the broader market by over 40% since he recommended it in November 2015…

Investing in Stocks: This Company Passed the F-Score Test with Flying Colors 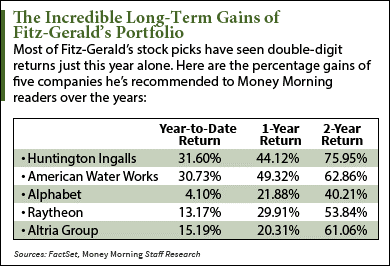 Huntington Ingalls is the largest builder of ships and aircraft carriers in the United States. The company specifically supplies fleets for the U.S. Navy and U.S. Coast Guard. Formed in 2011 as a spin-off of defense giant Northrop Grumman Corp. (NYSE: NOC), it has built over 70% of all U.S. Navy warships.

Fitz-Gerald recommended HII stock last November, and it's gained 43.8% since then. It's a healthy investment thanks to its stable beta of 1.13 and low price-to-earnings ratio of 18.5.

He also thinks it's a good investment because of its strong fundamentals, which we'll see when we run the F-Score test…

With that, we can conclude the F-Score of Huntington Ingalls stock is eight. That means the company boasts stellar financial health and is poised for long-term returns.

But Fitz-Gerald has a timeline for when you should buy HII stock. His strategy will go beyond just market timing and offer the best possible returns for patient investors.

Stay tuned to Money Morning as Fitz-Gerald provides updates on Huntington Ingalls stock in the weeks ahead.

Next Up: Use This One Tactic to Profit from Tesla Stock Today