In a note last week, UBS echoed its earlier assessment that gold has indeed "entered a new bull run," as I shared with you last month. The precious metal had a spectacular first half of the year, with total global demand reaching 2,335 tonnes, the second highest on record, according to the World Gold Council (WGC).

Despite this, gold is still under-owned, accounting for only 3% of total ETF assets under management, UBS writes. The group adds there is room for new or returning market participants who might have cleared out their gold positions during the recent bear market.

Driving the bull run, according to the group, are "a prolonged period of depressed real yields" and "elevated macro uncertainty." These are themes I've returned to many times in the past six months, with global government bond yields continuing to drop below zero and economic and geopolitical unrest advancing following the Brexit referendum and ahead of the U.S. presidential election this November.

Confidence in monetary policy and appetite for government debt continues to erode. According to Zero Hedge, foreign central banks dumped a record $335 billion in U.S. Treasuries during the last year. The top seller in June was China, which cleared $28 billion in Treasuries off its balance sheet. Over the same period, the world's second-largest economy added to its official gold reserves – 500,000 ounces in June alone – in an effort to diversify its holdings. 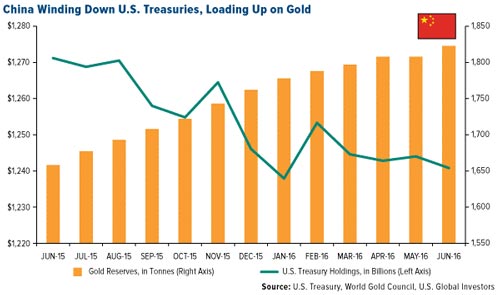 Investors should take heed of the fact that even central banks have become net buyers of gold. It's always been my recommendation to maintain a 10% weighting in your portfolio – 5% in gold bullion and another 5% in gold stocks.

A Superior Way to Gain Exposure to Gold

One of the best ways to play gold, I believe, is royalty and streaming companies. As a reminder, these gold companies serve as specialized financiers to explorers and producers. In return for upfront financing, they can receive one of two different types of payments. In one way, they can receive a royalty, or percentage, on whatever future sales the debtor company makes during the life of the mine.

In another way, they can buy a stream of precious metals at a low, fixed price. Discounts on gold, for instance, could be as much as 75%. This has typically been the preferred method for paying back the royalty company.

Some of our favorite names in this space include Franco-Nevada Corp. (NYSE: FNV), Silver Wheaton Corp. (NYSE: SLW), Royal Gold Inc. (Nasdaq: RGLD), and Sandstorm Gold Ltd. (NYSEMKT: SAND), all of which have outperformed underlying gold for the 12-month period. 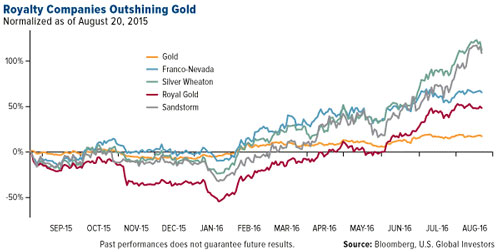 Royalty and streaming companies show great opportunity on the upside but avoid many of the risks and operating expenses that explorers and producers must deal with.

Interestingly, they all employ a small group of technically skilled mining geologists, engineers, metallurgists, and financial mining executives to analyze and monitor their investments.

Because they're not responsible for buying mining machinery and building, operating, and maintaining mines, they have a much lower total cash cost per ounce of gold than miners do. (In this context, cash cost refers to operational expenses that are paid using cash, rather than credit.) Their overhead is kept at a minimum, and they have some of the highest sales per employee in the world. As you can see below, their debt per share is much lower than senior miners Newmont Mining Corp. (NYSE: NEM) and Barrick Gold Corp. (NYSE: ABX) – the Army to royalty companies' more agile and tactical Navy SEALs. Barrick cut $3.1 billion in debt last year and is on track to pay down an additional $2 billion this year. 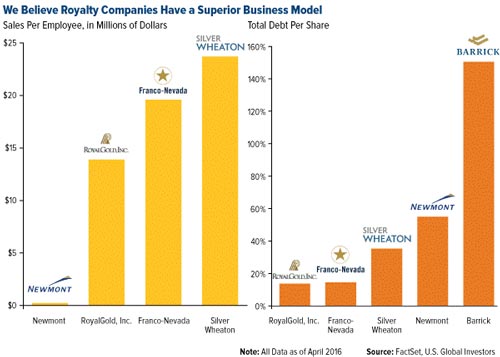 Their margins have typically been much larger than traditional explorers and producers, allowing them to remain profitable even during gold bear markets.

Take Sandstorm, one of the younger royalty companies. Its second-quarter cash cost per ounce of gold was a mere $261, giving it operating margins of $994 per ounce.

Compare this to Barrick, the world's largest gold producer. Barrick reported cash costs of $578 per ounce, nearly double that of Sandstorm – and Barrick has some of the lowest costs compared to other miners, according to Motley Fool.

Investors like royalty companies because they're a skilled team of former miners and mining executives who generate substantially greater gross margins and have materially fewer employees, with less general and administrative expense.

Further, they offer spectacular optionality. They often buy an asset with a payload over 10 years. However, these deposits often extend for 30 years, so they have potential for a much bigger payback. If the mining company expands production, it's free additional cash flow, and if they make a large discovery near the producing mine, the royalties have free upside growth.

Just as there still might be ample scope for gold investors to participate in the market, one CEO is betting there's still room for another entrant into the precious metals royalty company space. Long-time precious metals commentator David Morgan recently helped found Lemuria Royalties, which reported in June that it had acquired its first silver royalty from a Peruvian mine operated by a subsidiary of Fortuna Silver Mines.

In January of this year, Morgan summed up his reasoning for establishing a new royalty company: "We favor the streaming and royalty companies a great deal because the risk is very low relative to, let's say, an exploration company or even a producing company."

This is precisely why we continue to find the royalty business model very attractive.

Editor's Note: Frank Holmes is chief executive officer and chief investment officer of U.S. Global Investors Inc., which manages a diversified family of mutual funds and hedge funds specializing in natural resources, emerging markets, and infrastructure. He has been profiled by Fortune, Barron's, Financial Times, and other publications. If you want commentary and analysis from Holmes and the rest of the U.S. Global Investors team delivered to your inbox every Friday, sign up to receive the weekly Investor Alert at www.usfunds.com.

All opinions expressed and data provided are subject to change without notice. Some of these opinions may not be appropriate to every investor. By clicking the link(s) above, you will be directed to a third-party website(s). U.S. Global Investors does not endorse all information supplied by this/these website(s) and is not responsible for its/their content.

U.S. Global Investors, Inc. is an investment adviser registered with the Securities and Exchange Commission ("SEC"). This does not mean that we are sponsored, recommended, or approved by the SEC, or that our abilities or qualifications in any respect have been passed upon by the SEC or any officer of the SEC.

What are the risks that mining company go under? Does the 'stream' is insured or protected ?