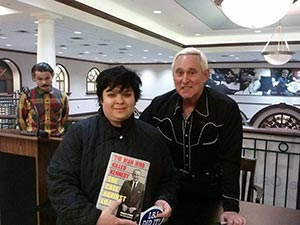 (Sidenote: An "October Surprise" is any political event orchestrated in the month prior to an election in hopes of affecting the outcome.)

Stone, an unofficial Trump adviser, first made this claim to The Blaze TV's Dana Loesch on Aug. 16.

However, during a C-SPAN segment that aired Sunday (Aug. 21), Stone elaborated on his assertion even more…

He explained that, thanks to info from a "mutual acquaintance" of both his and ousted WikiLeaks founder Julian Assange, the public can indeed expect to see much more from the exiled whistleblower in the form of strategically dumped Clinton email batches.

Stone's statement aligns perfectly with threats Assange himself has made.

For example, on July 29 the WikiLeaks founder told CNN that he has a lot of information (from the DNC, the Clinton campaign, and the Clinton Foundation) that he intends to leak to the public in different batches. One such batch will allegedly surface just prior to each of the three upcoming presidential debates.

Another trove will come in the form of the massive October Surprise.

Stone was then asked on C-SPAN to corroborate Assange's threat that the October Surprise specifically will stem from the elusive 30,000 emails Clinton claims to have had deleted because they were personal in nature.

Here's what Stone had to say…

"Well, first of all, I think Julian Assange is a hero," he replied. "I think he's taking on the deep state, both Republican and Democrat. I believe that he is in possession of all of those [30,000] emails that Huma Abedin and Cheryl Mills, the Clinton aides, believe they deleted. That and a lot more. These are like the Watergate tapes…"

Up Next: Deaths associated with the Clintons keep rising… On Aug. 1, Victor Thorn, a prolific writer and Clinton researcher, died at his home from an apparent suicide. Thorn's death is added to a list of over 40 other people who knew the Clintons intimately…