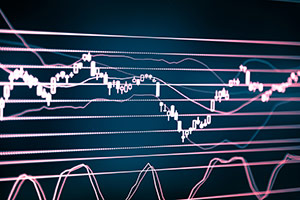 Negative-yield bonds are another bizarre phenomenon in a global economy driven mad by central banks.

Before July, when Japan's bond yield went negative, never before had bond yields fallen below zero. It's an unprecedented market move that's only getting worse...

"More than $12 trillion of global debt is now in negative-yielding territory - a move directly at odds with the argument that the global economy is healthy," says Money Morning Global Credit Strategist Michael Lewitt.

Having a negative yield on a Treasury bond means some governments actually charge you for buying their debt. Crazy, right? But what's even crazier is that this trend is showing up in developed countries like Germany, France, Italy, and Spain.

One-year Treasury bonds in these four countries all have yields lower than -0.20%. In many cases, it takes buying a bond with a 30-year maturity date to actually get a positive return. And even then, those returns are paltry. A 30-year Japanese Treasury bond has a yield of 0.04%.

Despite the outward absurdity of buying bonds with negative yields, investors are still purchasing them.

And there are a few reasons why...

Why Investors Are Purchasing Negative-Yield Bonds

It's important to keep in mind: not all investors buying bonds are individuals. Much of the buying comes from institutions, like central banks, corporate banks, or insurance companies.

Central banks have to buy Treasury bonds for their foreign-exchange reserves and stimulus efforts. This has greatly exacerbated the negative-yield issue. The more bonds being bought, the lower the yield. 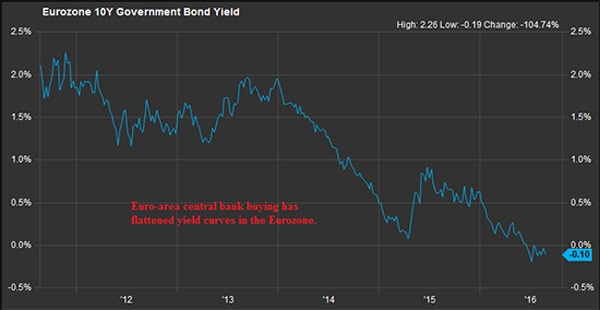 Lastly, insurance companies who manage pension funds must own bonds to match their liabilities. That means even negative-yield bonds are game.

But it's not just institutions that are buying into negative-yield bonds - retail investors are, too. And there are several reasons why...

First, someone might buy a negative-yield bond to profit from a rising currency. For instance, an investor in Switzerland might buy a German one-year Treasury bond because they think the euro will appreciate against the Swiss franc. Since the Swiss investor's home currency is lower in value, a big enough gain in the euro would offset the negative yield.

Second, anxious investors might prefer to take a small loss on government bonds than bigger losses elsewhere. This mostly pertains to Europe, where negative interest rates have often compromised traditional outlets for money, like savings accounts. For instance, a small community bank in southern Germany is now charging a fee of 0.4% on deposits of more than 100,000 euros in accounts. This was in direct response to the European Central Bank's negative-interest-rate policy.

So, a German investor might think putting their money in one-year Treasury bonds is a safer option than a bank. Treasury bonds are fairly liquid, and the German government is unlikely to default on its debts.

Investors holding U.S. bonds don't have to deal with negative interest rates or negative-yield bonds - yet. Even so, the yield on a one-year U.S. Treasury bond sits at just 0.50%. That's not very appealing for a bond with a one-year maturity date.

Lewitt, who has created some of the world's top-ranked hedge funds over his 29-year career, has a much more attractive investment for investors contemplating bonds.

His favorite "alternative" place to put cash is in an atypical Treasury holding. This holding is a far more liquid and accessible place to put your money than traditional Treasury bonds...

Here's the Best Alternative Investment to Negative- or Low-Yield Bonds

One- and three-month Treasury bills are available in denominations from $1,000 up to $5 million. The current yield for a one-month U.S. Treasury bill is 0.20%. So if you bought a single $1,000 Treasury bill and waited for that bill to mature, you'd be looking at a $1,002 return - a gain of $2. While meager, that's still on par with the interest rate on most U.S. savings bank accounts. And the big selling point here is that U.S. Treasury bills are an incredibly safe investment. In contrast, banks insured by the Federal Deposit Insurance Corporations can only insure up to $250,000 of your deposits if a bank fails.

With U.S. Treasury bills, you'll know all your money is completely protected, with the added benefit of getting a small return.

On the day your Treasury bill matures, the U.S. government deposits the proceeds automatically into your bank account. But of course, the whole point of investing in Treasury bills is to avoid bank accounts, according to Lewitt.

So, instead of "cashing out" when your bills mature, Lewitt recommends making your TreasuryDirect account roll over the proceeds into buying a new bill of the same type. You can schedule this reinvestment plan when you buy your initial bill, and it'll last for two years (until you have to set it up again).

Up Next: The main problem with our do-nothing Congress isn't what you think. Here's the shocking truth about what lawmakers really do all day...