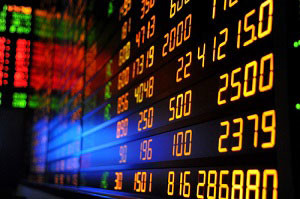 Markets received a slight boost from improving economic data in China, where a surprise expansion of the manufacturing segment bolstered trader sentiment. Unfortunately, the U.S. manufacturing base contracted last month for the first time in six months. A monthly report from the Institute of Supply Management raised concerns about third-quarter growth at a time that GDP is already expanding at an anemic rate.

The markets appear to be in a holding pattern ahead of a critical announcement on the U.S. jobs market on Friday. Everyone is waiting for the August unemployment report from the U.S. Labor Department. According to surveys, the consensus of economists calls for a slowdown in hiring for the month of August after two solid reports for June and July. With no major U.S. companies set to report earnings tomorrow, expect the Federal Reserve to dominate the trading day.

Let’s look at the final numbers on Tuesday for the Dow, S&P 500, and Nasdaq:

Here’s a look at today’s most important market events and stocks, plus a preview of tomorrow’s economic calendar.

The Dow Jones held its head above water despite a sharp decline in oil prices on Friday. Crude oil prices fell to a three-week low as concerns about a U.S. supply glut weighed on trader sentiment. The price of WTI crude fell by 2.7%, while the price of Brent crude was off 2.6%. Traders brushed aside hope of a production freeze by members of OPEC later this month. Instead, they focused on the surprise jump in domestic crude supplies reported by the U.S. Energy Information Administration on Wednesday.

In deal news, shares of Hewlett Packard Enterprise Co. (NYSE: HPE) gained more than 3.1% on news that the firm is considering a deal to sell its software division to buyout giant Thoma Bravo LLC for between $8 billion and $10 billion.

But the big story today was the bombshell report that the United States allowed secret loopholes in its nuclear agreement with Iran. It turns out that last year's landmark Iran nuclear deal between Washington, Tehran, and other world powers included a few provisions that were kept from the public. Here’s what it means to the world and how the deal impacts the global oil markets.

Now, let’s look at the stocks you need to know about today…

Up Next: September is historically the worst month for stock markets. That's why we advise investors to be particularly selective. If you're looking to profit, these are the stocks you need to own.