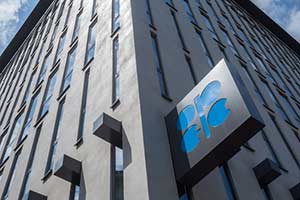 The price of crude oil is down slightly today (Thursday), paring some of yesterday's gains following OPEC's preliminary agreement to cut oil production.

What Sent the Price of Crude Oil Skyrocketing This Week

Oil prices surged 5% to over $48 a barrel Wednesday following reports that OPEC members reached a preliminary deal to freeze production. The agreement came after a six-hour gathering of cartel and non-cartel members. It marked the first OPEC deal in eight years.

Yet the final decision on whether to cap production won't be decided until late November at the next OPEC meeting. OPEC members are scheduled to meet in Vienna on Nov. 30.

The price of crude oil soared, but it still remains to be seen if a final agreement will be reached. Previous attempts to reach a consensus on oil production have failed. And deciding which nations will trim production and by how much will take some very thoughtful and delicate negotiating.

OPEC members have been producing oil at a record rate. They are competing among themselves for buyers despite record oil supply and demand that is not keeping pace.

With yesterday's gains, the price of crude oil is now up more than 22% in 2016. But it remains down more than 60% from highs of $112 a barrel hit in June 2014. Crashing oil prices have resulted in a cache of bankruptcies and hundreds of thousands of job losses worldwide.

And the economies of many OPEC member nations are struggling…

Saudi Arabia is the largest OPEC producer by far. The kingdom's output is more than 10.7 million barrels a day. That's on par with Russia and the United States. As such, it has some muscle in negotiating any oil production deal.

Plus, Saudi Arabia currently has a strong incentive to help boost oil prices.

The oil-rich nation is in the midst of remaking its economy into one that is more economically diversified and less reliant on oil prices. Part of that plan includes issuing stock in its state-owned oil company, Saudi Aramco. An IPO is anticipated for some time next year.

Wednesday's OPEC outcome has traders cautious. But at the very least it has put a floor under oil prices.