The price of gold per ounce continues to be volatile, and gold spent much of the past week searching for direction.

Gold prices have faced a formidable headwind this month in the U.S. dollar. In fact, the dollar has been one of the few rare assets that has been climbing, along with oil.

The S&P 500 is down 1.35% since Monday, and long-term bonds continue to sell off. Is the Fed finally getting what it wants? Is it going to get higher rates, or at least the expectation of inflation? 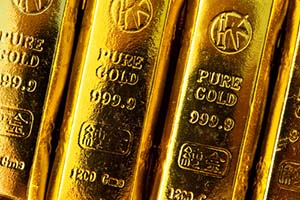 That’s how it looks right now. With a fresh set of Fed minutes released this week, the dollar rose in anticipation, while bonds sold off along with stocks.

And these multiple factors have all been weighing on the price of gold per ounce.

How the Price of Gold per Ounce Is Trending This Week

Gold prices ended the previous trading week on a volatile note. After bottoming at $1,252 in the early morning of Friday, Oct. 7, prices rebounded slightly to close the week out at $1,258.

Then on Monday, the price of gold climbed in early trading and peaked at $1,264 by 3 a.m. But that was to be its high point for the day. It had weakened to $1,259 by the open and moved sideways to close at that same price.

Profit from Gold Prices Now: Most investors don't know the best way to actually invest in gold. That's why we created our complete guide to gold investing – free of charge. Read here…

Gold fell again on Tuesday, as investors began anticipating a hawkish sentiment from the Fed in the next day’s Fed minutes release. At the 5 p.m. NY close, sellers pressured gold down to $1,252.

Wednesday is when the Fed September FOMC meeting minutes were released. By most accounts, the meeting had a hawkish tone for interest rates, suggesting a hike sooner than later.  In any case, the market certainly leaned towards buying dollars, helping to push the DXY to a level not seen since March. The price of gold per ounce actually started at $1,253, spiked to $1,257 after the minutes were released, and settled at $1,255.

Then on Thursday, the market seemed to think the dollar had become overbought while gold was a bit oversold. So it opened at $1,256 at closed at $1,258.

Here’s how the DXY surged in the past week before retreating on Thursday. 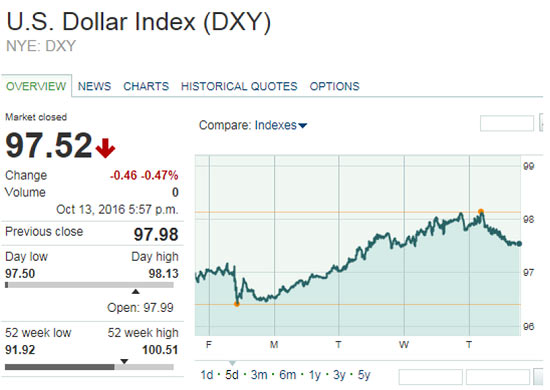 Between midday Friday and early Thursday, the DXY had surged more than 150 basis points.

With the volatility we’ve been seeing in the price of gold per ounce, investors keep wondering where prices will head by the end of the year. Here’s my gold price forecast…

What’s Next for Gold Prices This Year