Hedge funds look like they're down for the count, having been beaten-up by self-inflicted underperformance in the face of over-the-top fees, high-profile slip-ups, and investors stepping over them on their way to low-cost, passive investing strategies.

But don't count Hedgies out just yet…

One reason hedge funds have been underperforming benchmarks has become abundantly clear and can be overcome (as you'll see). They're also knocking down fees to hold onto investors and attract new limited partners.

Not only that, the multitrillion-dollar trend towards passive investing could blow up spectacularly.

Today, I'm going tell you what's going on with hedge fund underperformance, those exorbitant fees, and why the trend toward indexing could be hell for the market and a godsend for hedge funds.

But first, let's all get on the same page…

What Is a Hedge Fund, Anyway? 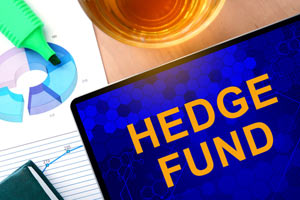 Jones sold his investors on the proposition that they were hedged against the market's fluctuations and because he was able to generate "alpha" (a return better than the market) because of his stock-picking abilities, he would charge them a management fee and take a good percentage of the gains as a performance fee.

That's how the term "hedge fund" came about, while the prospect of generating "alpha" is how managers justify performance fees.

Today, "hedge fund" is a generic name for a limited partnership, a limited liability company, or some other entity structure where investors fork over money to a manager to invest however he or she sees fit.

Good luck suing the manager of a fund for losing money if you sign off on giving them carte blanche.

In spite of the designation hedge fund, most hedge funds today don't hedge against market moves.

That's one reason funds too often underperform in down markets. But there's another much bigger reason why so many funds have been underperforming for so long.

It wasn't always that way…