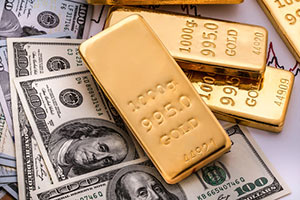 The spot gold price today (Monday) was modestly higher in early trading thanks to a weaker dollar and a wave of corporate earnings this week.

Shortly before the opening bell, the spot gold price today was up $5.20, or 0.41%, at $1,271.90 an ounce. Pushing gold prices higher today was the slightly lower U.S. Dollar Index. The greenback drifted down on profit taking after reaching a seven-month high overnight.

After rising 29% over the first seven months of 2016, the bull run in gold prices has temporarily paused. Confidence that the U.S. Federal Reserve will raise rates in December has pressured gold since mid-summer. Gold prices have dropped 6.7% since July. For the year, gold is now up 19.4%.

Market odds for an interest rate hike in December now sit at 64%, according to CME Group's FedWatch tool. That's a sharp shift in sentiment from earlier this year. Low interest rates through the first half of 2016 were bullish for spot gold prices.

But a string of upbeat economic data and hawkish comments from Fed officials over the last several weeks have weighed on gold prices.

In early August, a better than expected U.S. jobs report sent gold prices down 1.7%. That was the precious metal's largest daily decline in months.

An even steeper decline came on Oct. 4, when spot gold prices fell 3.3% to $1,266.30 an ounce. That was gold's lowest settlement since June 23 and its biggest loss since Dec. 19, 2013. The decline was sparked by a sharply higher dollar, upbeat economic data, and additional calls from Fed officials for a rate hike.

Since then, gold prices have stabilized as analysts and economists realize the Fed will remain extremely accommodative even when raising rates.

Meanwhile, the upcoming presidential election could give gold prices a boost in the short term. Market volatility is expected no matter who wins the White House.

But in the next several weeks, gold prices could correct further.

The spot gold price could dip down to $1,200 an ounce, according to Money Morning Resource Specialist Peter Krauth. If that happens, Krauth says it will be a "great opportunity for anyone to either initiate or add to their gold holdings."

Krauth says $1,400 remains within reach this year with much higher prices further out. Here's his full gold price prediction, including a shocking price target for 2020...