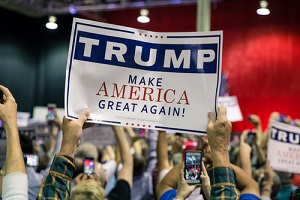 The Dow Jones Industrial Average surged Wednesday after Donald Trump defied the polls and became the 45th President of the United States.

Markets were extremely volatile in pre-market hours, but the Dow Jones, S&P 500, and Nasdaq all finished up more than 1%.

The CBOE Volatility Index (VIX) - commonly referred to as the markets' "fear gauge" -cratered more than 21% to below 15. Markets reacted positively to Trump's policy goals, which include the repeal of the Affordable Care Act, corporate tax reform, reduced Wall Street regulations, and a boost in U.S. infrastructure spending.

The Dow Jones surged 256 points after Donald Trump won the 2016 presidential election. It was a wild ride as markets stormed back from an 800-point deficit in the futures market last night when Trump pulled ahead in electoral votes. Today's trading session was a story of winners and losers from the 2016 election. Sectors like biotechnology, healthcare, and finance saw big upward swings. Alternative energy, firearms, and government healthcare providers saw sharp declines. The financial sector rallied more than 4%, pushing the Dow within 50 points of an all-time closing high and 75 points shy of an all-time intraday high.

The market swing is reminiscent of the sharp downturn and strong rebound of the global markets after Britain voted in June to leave the European Union.

The price of crude oil climbed higher after Trump's surprise victory. The uptick came despite news that the Energy Information Administration reported that U.S. crude inventories increased by 2.5 million barrels last week. That figure is about a million barrels higher than analysts had forecast.

The U.S. energy sector is expected to be a big beneficiary of the Trump presidency. With domestic crude production in focus, investors are eyeing the progress of OPEC's deal and the state of the nuclear deal between Iran and the United States. This morning, Iranian officials said that Trump should remain committed to the nuclear deal.

Of course the big story today is the result of the 2016 presidential election. Following Trump's stunning victory, investors are wondering what they should do next. According to a poll conducted today by Reuters, economists anticipate that the Federal Reserve will hike interest rates in December. Such speculation helped push financial stocks higher on the day. Still, uncertainty is expected in the months ahead, which means that investors need a plan in order to profit from a Trump presidency. That's why we've put together a list of the best stocks to buy right now for 2016.