Trump's win of the presidency is now official.

I've been joking that he's already ordered another "Trump Tower" sign, this one to be installed on the White House. And then... he'll have it painted gold.

All joking aside and, love him or hate him, I think the Donald is going to end up being very good for gold prices in 2017. 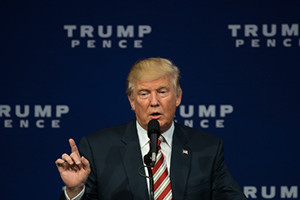 As news emerged that Trump's lead was likely to stick, gold prices exploded higher to the tune of about $60 in a matter of hours. But by late afternoon the following day, nearly all of those gains had evaporated.

For gold stocks, the story was similar. But my view is this is just a temporary reprieve, one that's an opportunity to buy gold at a temporary discount.

Trump's policies are going to be great for gold for a number of reasons. In fact, we already have some proof of this in the immediate aftermath, given how certain sectors are reacting.

Let's look at what you might expect from gold prices in 2017 with Trump as the new president, and why gold is almost certain to be considerably higher a year from now.

What Trump's Plans Mean for Gold in 2017

One of the most often repeated promises Trump made during his campaign was that he'd massively boost infrastructure spending.

In his first address as president-elect, Trump said, "We are going to fix our inner cities and rebuild our highways, bridges, tunnels, airports, schools, hospitals. We're going to rebuild our infrastructure, which will become, by the way, second to none. And we will put millions of our people to work as we rebuild it."

He's indicated he would spend more than $500 billion on infrastructure and provide up to $137 billion in tax credits for private companies that spend on such projects.

By some estimates, that could create a boost in GDP and help create as many as 200,000 jobs in the initial years.

All that additional money printing and spending is likely to lead directly to higher inflation. And the price of gold should thrive under those conditions...

Our Newest Prediction for Gold Prices in 2017