A Federal Open Market Committee (FOMC) meeting is coming up on Dec. 13-14, and the Fed meeting history shows that the meeting will profoundly affect future rates and the stock market.
During FOMC meetings, the Board of Governors of the Federal Reserve System and the presidents of the regional Federal Reserve banks examine economic data and set monetary policy for the months to come.

If the Fed sees a strengthening economy, it may raise rates. If the economy looks as if it is not gaining strength, the Fed may leave them as is or even lower rates, which are already at historic lows.

With each rate move, the Fed affects the markets...

How the Fed Moves Markets 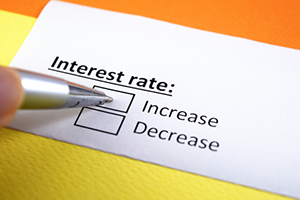 The level and direction of interest rates throughout the Fed meeting history have had a dramatic effect on stock and bond markets.

The Fed performs a balancing act to keep the effects of interest rates in check. Raising rates too quickly can impede a recovering economy. Dropping rates too low for too long can cause inflation. No matter which direction rates move, all businesses are affected because money becomes either cheaper or more expensive to borrow.

Easing rates is widely viewed as an economic stimulus. Rates are at historic lows now because the Fed has been cautious since the Great Recession of 2008-2009. It has been waiting for a hard-hit economy to fully recover. A hike in rates is widely seen as a sign that the economy is in full swing.

Don't Miss: A perfect storm is brewing... bringing with it the greatest wealth event in 20 years. Find out more.
Because of the impact rates have, Fed meetings and the announcements of Fed Chair Janet Yellen are constantly surrounded by a high level of scrutiny. The scrutiny helps eliminate surprise moves by the FOMC. Since markets don't like surprises or uncertainty, a surprise move can cause extreme fluctuations in the markets.

Last December, the Fed raised rates to a range of 0.25% to 0.5%, the first increase in a decade (and a historically low rate by Fed meeting history standards). At that time, the Fed indicated that the economy had gained sufficient strength since the recession of 2008. Unemployment stood at 5%, the figure economists peg as reasonably full employment. Inflation, which the Fed keeps tight watch on, was low.

But the move had a major impact on markets, as the Dow declined 10% during the first six weeks of 2016. Higher rates lead to a climbing U.S. dollar, which makes U.S. goods more expensive overseas, and debt becomes more expensive.

Ultimately, the stock market decline was one of several factors in Fed meeting history that has backed the Fed away from raising rates in 2016.

Concerns about weak global markets, the impact of the Brexit, a slowing Chinese economy, and low oil prices have all led to market fears in 2016.

So will the Fed actually hike rates this month?

Will the Fed Raise Rates in December?

Looking at how Fed meeting history has moved markets in the past leads to an inevitable question. Is the Fed likely to hike rates in December?

According to CME FedWatch data, a widely used indicator of market analyst expectations of Fed moves, there is a 95% chance that the Fed will increase interest rates this month.

You see, when the economy looks strong based on the current economic reports, the Fed usually raises interest rates.

The most widely talked about economic report is the jobs report. November's jobs report was strong with a decrease in unemployment, making the current unemployment rate just 4.6%. There was also a significant jobs increase of 178,000, mostly in professional and business services and healthcare.

Another strong indicator of a strengthening economy is that there was an increase in residential construction jobs for November, marking three straight months of increases for this industry.

All of the indicators are pointing to an increase in interest rates in December based on the current economic reports.

How the Economy Dictates Interest Rates

Fed meeting history shows that rate hikes rarely happen in a time of economic uncertainty. In fact, the weakness in global economies has been a persistent theme at the FOMC meetings so far in 2016. In June, the jobs report was dismal - so dismal that the Fed signaled it expected to hike rates just once in 2016 and three to four times in 2017.
The Fed's expectation of one rate hike in 2016 made earlier this year is expected to remain because despite global economic uncertainty surrounding the long-term effects of Brexit and Quitaly, the U.S. economic indicators remain largely positive. The positive jobs report for November is just one indicator of a recovered economy.

With Nov. 8 behind us, uncertainty in the U.S. markets is not as high as it was leading up to last month's election. The Trump effect has sent stocks to record highs in the last month, and the momentum of the upward movement of stock prices, along with positive economic indicators in November, suggest the economy is strong. This means it is a good time to raise interest rates.

Three Actions to Take Given the Fed Meeting History... and Future