As the current seven-year bull market rages on, we've found some startling comparisons between the market now and the market of 1929.

That's why we're analyzing the 1929 stock market crash versus today and pointing out some of the major warning signs we've found...

And that has some investors alarmed we could be heading for another stock market crash.

While there are some key differences between the two periods, we want to remind investors to be prepared for a market crash, especially when the Dow is breaking record highs again...

Looking at the 1929 Stock Market Crash Versus Today

To show you the similarities between the stock market of the 1920s and today, we put together a side-by-side chart of both. This shows the 1920s bull market up to the crash of 1929 compared to today's bull market.

The chart below shows the Dow (in inflation-adjusted dollars) grew differently in each era. But you can see the growth trend is very steep in both periods. 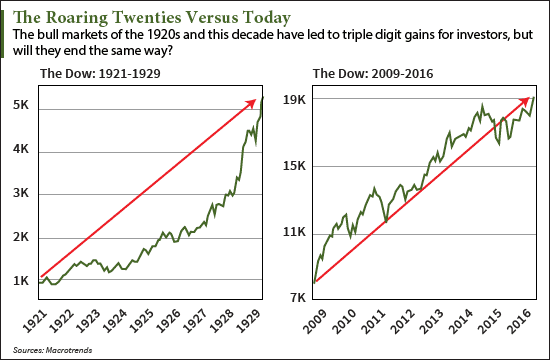 Both markets consistently grew to new highs with only minor pullbacks along the way.

The Dow saw higher growth in the 1920s, soaring 329% from the beginning of the bull market in October 1923 until the stock market crash on Black Tuesday in October 1929. But the Dow is currently in the midst of triple-digit gains again, surging 139% from March 2009 to today.

The Dow routinely shattered record highs during both eras, too.

Obviously, the level of growth couldn't be sustained in the 1920s...

That's why we've examined both periods to see if our current bull market is sustainable or if we could see a stock market crash in 2017. And we've found a key similarity in what fueled record-breaking gains during both eras...

Is Speculation Fueling the Market Again?

The primary cause of the 1929 stock market crash was unfettered speculation on stocks.

One of the mentalities of the 1920s that led to the stock market crash being so catastrophic was a sense that the soaring markets would continue to grow.

On Sept. 3, 1929, less than two months before the massive stock market crash, one of the most influential economists of the time said "stock prices have reached what looks like a permanently high plateau."

This mindset led investors to speculate recklessly throughout the 1920s. Amateur speculators borrowed $8.5 billion to buy stocks during the decade leading up to the 1929 stock market crash.

The logic was simple. As long as the stock market kept rising, money was better spent on stocks than anywhere else, and the loans investors were taking out could easily be paid back later.

And as more and more money was dumped into the stock market, prices kept rising, further justifying stock purchases. However, this inflation was artificial. When stock prices dipped and nervous investors began selling, the entire market crashed.

Today, the market continues to be influenced by speculative behavior. Another stock market bubble could be forming.

Trending Now: A door has opened for an ultra-rare but powerful anomaly in the stock market... It involves a precious metal, one that's considered exceedingly more rare than gold. Get all the details.

Investors are taking out more and more money to buy stocks as prices continue to rise. While no experts are making bold claims of permanent growth like Fischer's in the 1920s, many experts are encouraging investors to continue to spend.

Voya Global strategists released a report in 2016 arguing investors shouldn't worry about climbing stock prices because "selling out in this market due to fear of overvaluation may be a mistake."

Earlier this year, Robert R. Johnson, the president and CEO of the American College of Financial Services, told U.S. News & World Report "I believe that quantitative easing and expansive Fed monetary policy has been the biggest single driver in the bull market since the financial crisis."

This is in part the reason the Fed uses lower interest rates to stimulate economic growth. The logic is that corporations will be able to borrow money more easily and then funnel this money into new projects or expansion, growing the economy.

However, what we've seen is corporations are using the money from cheap credit to purchase shares of their own stocks as a way to drive up share price and reward shareholders.

According to a report by Reuters, the value of corporate share purchases hit a record $520 billion in 2015.

And this is only part of a longer trend. Between 2008 - when interest rates were slashed - and 2015, American companies have added nearly $2 trillion in debt as they've repurchased $2.24 trillion of their own stocks.

Not only does this mean the value of stock prices is artificially high, but it's unsustainable once interest rates rise.

This, again, has caused stock prices to rise unnaturally. In a period of higher interest rates where bonds are more competitive and offer a safer return, much less money would be going into stock purchases. It also means money is going into riskier investments just because they continue to go up in price.

We can't predict what will happen with certainty, but with borrowed money contributing to the current bull market, a routine correction could lead to a dramatic sell-off. That could cause a 2017 stock market crash.

Or the Fed could raise rates and trigger a different kind of sell-off. And the Federal Reserve meets next week, when it's expected to raise interest rates again.

Now that we've shown you why 1929 should be a warning sign for today, we need to show you how to protect your money during a stock market crash...

a huge crash is coming, everoney is getting sucked in