Now that was brutal. Anyone who owns silver or silver investments probably felt a punch in the gut last week. Silver prices today (Monday) are down again slightly, slipping 0.22% to $16.04.

But the light at the end of the silver price correction tunnel just might be shining brighter.

We all pretty much knew the Fed was going to raise rates. What followed led to a surge of roughly 250 basis points in the U.S. Dollar Index, and in turn some wholesale silver dumping.

That pounded silver prices by 2% in the immediate aftermath, and then by a further 5.25% over the next day. 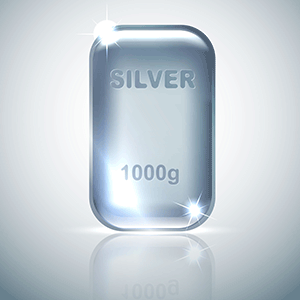 In last week's gold update, I told you it was possible we had seen a bottom for this correction.  Of course sentiment had gotten way oversold, plus history could rhyme if not repeat.

I say that because silver bottomed a year ago at $13.70, right around the same time as gold. And that was right after the last Fed rate hike. So only the next few weeks and months will tell us if we get the same price action this time around.

Right now fear is rampant in the precious metals sector. It could be time to get greedy. Here's how silver prices today are trending and where they could be headed next…

Silver Prices Today Continue a Tough Stretch for the Metal

Silver prices started out the last trading week mostly flat. They opened for NY trading at $16.84 on Monday and climbed modestly to close at $17.05.

Thursday brought more follow through negative price action. Silver opened at $16.15 and kept dropping to reach a 12:00 p.m. bottom at $15.89. From there, it reversed direction and headed slightly higher to close at $15.95, still below the psychological $16 level.

And here's the U.S. Dollar Index (DXY) action that silver had to fight against. 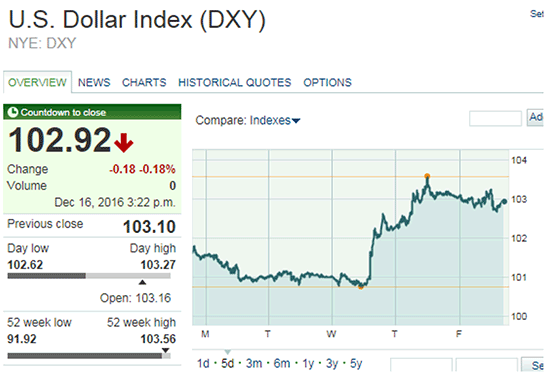 That hefty 250-basis-point rally from Wednesday into Thursday was silver's nadir. But we can see that the DXY peaked midday Thursday, and as it began backing off, silver prices began rising.

By Friday afternoon, silver had regained the $16 level, trading at $16.06 by late afternoon.

So what's next for silver? My sense is there's a strong possibility silver's bottom for this correction is behind us. If that's the case, then 2017 could be shaping up for a spectacular year.

Where Silver Prices Are Headed in 2017