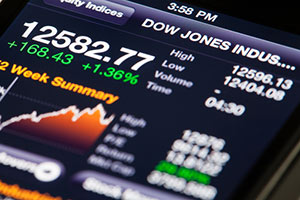 The Dow Jones Industrial Average is rising this morning on news that President-elect Donald Trump has received the votes of 270 electors to become the next leader of the United States.

In a vote Monday, Trump staved off last-minute efforts by anti-Trump activists to encourage members of the Electoral College to be unfaithful and cast their official vote against the will of the voting public.

In other headline news, the global markets are digesting three different terrorist attacks over the last 24 hours. And the Italian government could be offering its struggling banks some economic support.

The Dow is projecting a more than 50-point gain ahead of a busy day of earnings reports and growing geopolitical concerns around the world. With the holiday season in full swing, the markets are experiencing lower than usual trading volumes. That said, overnight developments in Europe and Asia are impacting the global markets.

War, Terrorism, and Ugliness is a horrible trend that continues to generate headlines around the globe. Over the last 24 hours, three more examples hit the global markets. In Berlin, Germany, 12 people died after a truck drove through a holiday market. This attack came after a shooting in Zurich, Switzerland, and the assassination of Russia's ambassador to Turkey in the Turkish capital, Ankara. The attack hurt the euro and fueled an uptick in the U.S. dollar.

The U.S. government continues to target European banks over their role in the financial crisis eight years ago. This morning, the Department of Justice announced it had asked Swiss financial giant Credit Suisse Group AG (NYSE ADR: CS) to pay at least $5 billion to settle an ongoing probe into toxic mortgage-backed securities. Reuters reports this morning, however, that Credit Suisse is attempting to thwart this settlement and seek a better deal with Attorney General Loretta Lynch.

Crude oil prices were on the rise in light trading volumes as investors begin to unwind positions and turn their focus to 2017.

But the big story this morning is happening with ride-sharing giant Uber. According to a report by Bloomberg, Uber lost more than $2.2 billion through the first nine months of 2016. That includes an $800 million loss that came in the third quarter at a time that it sold off its business in China. Revenue has risen around the world, however, and the company recently reached an Uber IPO valuation of between $66 billion and $69 billion.

This valuation makes the anticipated Uber IPO one of the most-hyped IPOs in years. So, should you invest?