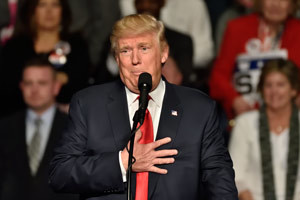 President Trump speaks on his relief at having won the state of Texas on election night, Dec. 15, 2016.

But something must be done – and soon – to address these entitlement programs' looming financial crisis.

According to Congressional Budget Office estimates released in 2015, Social Security's cash deficit is set to explode to $361 billion in 2025 from $74 billion in 2014.

The CBO's findings also pointed to the $2.8 trillion Social Security trust fund (which includes Medicare expense coverage) to begin its official depletion run late in 2029, after which its revenue will cover only about 75% of scheduled benefits until 2034.

These estimates, of course, pertain to Social Security and Medicare's fate should Uncle Sam take no further actions to thwart the programs' demise in the very near future.

And despite Donald Trump's reiterated vows not to cut SS benefits, his nomination for budget director – Rep. Mick Mulvaney (R-SC) – suggests he might do just that…

In his Senate testimony last Tuesday (Jan. 25), Mulvaney stated he believes cuts to Social Security and Medicare are necessary in order to keep the programs solvent. His statement directly contradicted Trump's campaign pledges about entitlement programs.

"I have no reason to believe the president has changed his mind" on not touching entitlement programs, Mulvaney said, according to The Washington Post on Jan. 24. But, he added, "My job … is to be completely and brutally honest with him."

The South Carolina senator clarified his stance by stating his proposed cuts would not affect current recipients.

Must Read: These are the best stocks to buy for a profitable 2017.

Mulvaney also suggested immediate "means-testing" for those applying for Medicare benefits to begin as early as this year.

Means-testing is a method used by the government to determine whether someone qualifies for a financial assistance program. Insofar as Medicare is concerned, Mulvaney's plan would make Medicare available to retirement-age individuals on a case-by-case basis – thereby stripping away the program's designated "entitlement" status.

Aside from cutting benefits to these entitlement programs, however, there is another controversial option President Trump could utilize to stifle Social Security's fiscal demise…

A little misleading in that most ( not all ) of social security is not an entitl ment in that it is a forced savings program for the future. Most recipients do not get out what they paid in, some get more. When adjusted for inflation the spread is even less.