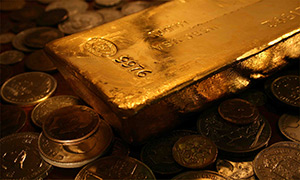 Before we talk about our top gold stock recommendations, let's look at the performance of gold prices in 2017...

Gold Prices Will Benefit the Best Gold Stocks in 2017

Since Jan. 1, the gold price has gained 6.8% to $1,232. And that rally is poised to continue. Money Morning Resource Specialist Peter Krauth projects that gold prices will rise 14% through the year. At the end of December 2017, he believes the price of gold will be trading at $1,400.

Those gains promise a similar rally for the best gold stocks in 2017. That's because the two companies we're recommending are both engaged in gold mining. Any increase in the gold price means these two companies can sell their gold at a higher price.

And there are three reasons why Krauth's 2017 gold price prediction is bullish...

Gold prices move higher when inflation climbs. We expect the yearly inflation rate to be higher in 2017 based on the robust stock market and climbing interest rates.

Inflation is not a good thing economically, though. It lowers the purchasing power of the U.S. dollar, which tends to lower spending from both consumers and companies. That can dampen the growth of the entire economy.

One of the reasons the U.S. Federal Reserve moves interest rates higher is to manage inflation and control the dollar's strength or weakness. In December 2016, the Fed hiked rates by 0.25% to keep the economy from overheating. It also indicated plans to raise rates several more times in 2017.

As a result, bond yields have also started to rise. The yield on the 10-year Treasury currently sits at 2.43% -- up from 2.07% just three months ago. Rising bond yields usually mean higher inflation is coming. And the most recent data from December shows the inflation rate at a 30-month high of 2.1%. That's also more than the 0.71% short-term interest rate.

Inflation isn't good news for the economy, meaning it usually spooks people into selling their stocks. When people aren't buying stocks, they're usually buying safe havens like gold. That will push both gold prices and gold stocks higher in 2017.

The second reason to be bullish on the price of gold in 2017 is the direction of short bet volume. For the gold sector, it's heading downward.

A short bet is a purchase based on an expectation of a stock going down rather than up. Investors who place a short bet on any stock or commodity expect to make a profit when it declines. In other words, rising volume of short positions means bearish sentiment is rising.

But the inverse is happening with gold stocks. The volume of short bets is declining and more hedge funds are going long on the gold price. According to Bloomberg, the average number of bullish positions in gold futures hit an eight-week high of 72,067 for the week ended Jan. 31.

In other words, traders and investors are buying more gold with the belief it will become more valuable. That indicates bullish sentiment for both prices and our two picks for the best gold stocks in 2017.

The third reason to be bullish on gold prices in 2017 is increasing strength in the U.S. dollar.

Krauth - a 20-year veteran of the gold and silver markets - projects that gold prices will climb despite U.S. dollar strength. Although gold and the dollar are considered inversely related, they don't always have this relationship. Just look at the 1970s...

Still, the price of gold was 24 times higher at the end of the decade than at the beginning. It boomed alongside the dollar and enjoyed what Krauth refers to as a "bull market of epic proportions."

In addition, the interest rate hike's boost on the dollar will eventually wear off. When that occurs, the gold price will rise from the dollar's weakness.

All three of these factors make us confident our two picks for the best gold stocks in 2017 will each post double-digit returns.

Here are the best gold stocks to buy right now...