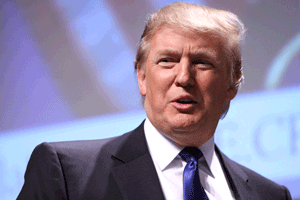 The stock market has roared higher since the Trump tax cut plans were teased on Thursday, Feb. 9. Since then, the S&P 500 and Dow Jones Industrial Average have surged 1.5% and 1.8%, respectively. They've both closed at new all-time highs three sessions in a row.

But Trump's tax proposal doesn't warrant these stock market highs right now. That's because his plans might not be implemented until late 2017 - at the earliest.

You see, President Donald Trump plans to make drastic changes to U.S. tax policy. In a nutshell, his tax cut plans primarily include...

The biggest reason Trump's tax plans are pushing markets through the roof is his proposed lowering of corporate taxes. When companies pay the government less money, they can hold onto more of their profits. This can obviously result in higher earnings and higher stock prices.

Investors have been piling into stocks, showing optimism toward Trump's plans for corporate America. But there are two reasons why Trump's tax plans may hit a couple snags in 2017.

Here's why it could take up to a year for Trump's tax plans to be implemented...

The first reason Trump's tax plans won't be effective anytime soon is that Congress wants to deal with another big issue first: Obamacare.

You see, Republicans have long despised Obamacare, which is formally called the Affordable Care Act. Although they oppose many facets of Obamacare, they mainly oppose how it has raised taxes and increased the national debt.

NEW: Plot your course to a 7-figure weed windfall with the top pot stocks from every ecosystem - growers, edibles, dispensaries, and more. Read more...

That's why the Republican-majority Congress has said it wants to focus on repealing Obamacare before working on the Trump tax cut plans. It wants a new healthcare bill on hand before removing Obamacare. This means Congress will likely be spending most of the year drafting up a replacement healthcare policy before new tax policy.

The second reason for the delay in Trump's tax plans is Congress' budget. House Speaker Paul Ryan said Congress won't be able to draft a new tax bill until the spring budget is approved.

In other words, the government might not start writing up the Trump tax cut plans until fall 2017 at the earliest. From there, they may not be formally implemented until 2018.

Regardless of its timeline, the tax plan is one of Trump's many policy announcements that have sent the stock market soaring. His intention to scale back the Dodd-Frank Act pushed the Dow Jones up nearly 1% on Feb. 3.

But Trump's unpredictability has also dragged certain stocks lower. When Trump tweets disapproval of a company, its shares typically nosedive. On Dec. 23, 2016, shares of Lockheed Martin Corp. (NYSE: LMT) fell 1.3% to $249.59 after Trump tweeted about the high cost of the company's F-35 program.

That's why Money Morning Director of Tech & Venture Capital Research Michael A. Robinson just recommended one of the best stocks to buy that will withstand any Trump volatility.

Shares of this company are up 45.4% over the last 12 months. Those gains beat the Dow Jones' climb of 27.9%. But the best part is this stock is expected to give investors another 14.1% by February 2017 - and that doesn't include its generous dividend.

Robinson says UNH stock is poised to rally once Congress completely dismantles Obamacare. That's because it gutted the profits of large American healthcare providers like UnitedHealth. The firm reportedly lost upwards of $850 million in 2016 on its Obamacare policies. Other firms like Aetna and Humana Inc. (NYSE: HUM) each lost roughly $300 million.

But Robinson believes Trump's initiative to change U.S. healthcare policy will boost profits for UnitedHealth in 2017.

"In October, many insurers announced they could not sustain the losses and pulled policies from a number of states," Robinson said on Dec. 15, 2016. "A revamped Obamacare or a new version of universal healthcare will certainly make a big difference in healthcare insurers' bottom lines."

Despite its steep losses from Obamacare last year, UnitedHealth still put up some impressive earnings numbers. From 2015 to 2016, its full-year revenue grew 18% to $185 billion. Full-year earnings came in at $7.48 per share - up 24% from the year before.

We expect this growth to accelerate in 2017 as Obamacare becomes less of a burden on profits. Analysts surveyed by Yahoo Finance expect the UNH stock price to reach $184.85 within the next 12 months. That would be a 14.1% gain from the Feb. 13 closing price of $161.99.

The Bottom Line: The announcement of the Trump tax cut plans last Thursday, Feb. 9, have had a huge bullish effect on the stock market. Although the news pushed the Dow Jones and S&P 500 to historic highs, Congress' budget and focus on Obamacare make it unlikely that Trump's proposal will be implemented in 2017. Regardless of the tax plan timeline, we recommend investing in UNH stock during Trump's presidency. The company will see strong profit growth thanks to Congress' intent of dismantling or revamping Obamacare.