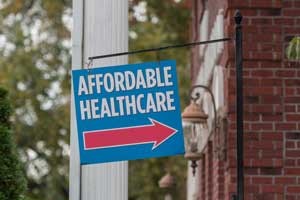 The Centers for Medicare and Medicaid Services (CMS) announced new proposed rules for Obamacare's individual insurance exchanges today. These are the first proposed changes to the Affordable Care Act (ACA) set forth by the agency under President Donald Trump's administration.

These "new rules" include several alterations for insurers in an attempt at "stabilizing the individual and small group health insurance markets," according to the press release issued this morning. They will also
"help lower prices by reducing adverse selection."

However, the CMS also stated that, in the short term, insured individuals will likely see "slightly increased out-of-pocket expenses" chiefly due to the following two alterations the program suggested be made ASAP...

The CMS suggested the following cuts be made to Obamacare immediately...

Lowering the minimum standards for coverage: The CMS' proposed changes would also lower the "de minimis range used for determining the level of coverage," according to the release. Essentially, the ACA established minimum standards for coverage in order to be certified on the bronze, silver, and gold plan levels. The new rule would allow insurers to cover slightly fewer areas of health and still be at a certain medal level.

The CMS projects the rules would result in increased out-of-pocket costs for Americans in the short term but that lower Obamacare premiums would offset this in the long run.

Republican lawmakers are now touting their plans to "repair Obamacare."

Not long ago, their tried and true adage was "repeal and replace Obamacare."

Here's why their language changed...