Investors are wondering if another interest rate hike in March will cause the next stock market crash.

That's because the stock market has been soaring, and the U.S. Federal Reserve hiking rates could throw water on red-hot stocks.

Just last week (Monday, Feb. 27), the Dow hit a new record closing at all-time highs 12 days in a row as the Trump rally kicked into high gear. And that's just the latest in an eight-year bull market run that started all the way back in March 2009. During the current bull run, the Dow is up 215% since bottoming out in 2009.

But now the Fed is ready to raise rates again. In fact, the Fed is all but guaranteed to hike rates during the FOMC meeting next Wednesday (March 15). The CME FedWatch Tool shows an 88.6% probability of a rate hike next week. 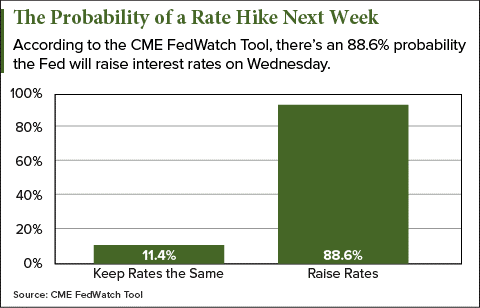 But will the stock market crash next week?

Why Hiking Rates Can Cause a Stock Market Crash

Hiking interest rates could cause a stock market crash in 2017 thanks to an overinflated stock market.

Low interest rates have pushed money into the stock market and driven up stock prices to unsustainable levels.

The Fed slashed interest rates during the 2008 financial crisis. Interest rates were above 5% before the recession, but by the end of 2008 the Fed cut rates to 0.25%. The idea was to stimulate the economy to combat the recession.

By making it cheap to borrow money, the Fed reasoned, corporations would be willing to borrow and spend on new projects or expanding their business. This would boost the economy and end the economic downturn.

That means the Fed's loose monetary policy has encouraged companies to pile borrowed money into stocks.

Bond investors have also been forced into buying stocks.

When the Fed slashed rates in 2008, newly issued bonds also paid miniscule rates of return. Investors relying on income from bonds had to turn to stocks to make money.

That's important because the bond money flowing into stocks artificially drove up prices. If interest rates were higher, then less money would have entered stocks and prices would be lower.

And we aren't just assuming stocks are overvalued.

Now with stock markets near all-time highs on the back of low interest rates, the Fed is planning to hike rates again. And that could send stocks tumbling down.

"But the risk always is interest rates go up, and that brings stocks down," Warren Buffett told CNBC just last week (Feb. 27).

Buffett might not be predicting a stock market crash, but the risk is there. With stocks overvalued, nervous investors might lead a sell-off that could spiral into a financial crisis.

But now is not the time to panic. Instead, smart investors can start preparing for a potential stock market crash.

Here's How to Protect Your Money from a Stock Market Crash