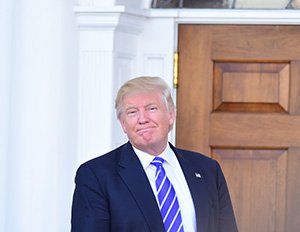 "We're going to be cutting taxes massively for both the middle class and for companies, and that's massively," Trump said in a meeting with top CEOs on Jan. 23, according to Business Insider. "We're trying to get it down to anywhere from 15% to 20%."

You see, Trump's original fiscal policy measure was supposed to be a combination of corporate and individual tax reform. But now healthcare reform savings are out of the picture, thanks to the GOP's failed healthcare bid. And White House aides are left struggling to fund their fiscal policy goals, like tax cuts.

In order to make up for the lost savings, the White House is now proposing a slimmed-down version of Trump's promised tax plan...

According to information gathered from FOX Business on April 13, the newest proposal could be "more modest than what was promised in order to enable corporations to repatriate profits held overseas."

The new plan focuses on a "repatriation process" that would tax the overseas corporate profits at 10% instead of the current 35%. The government would then use this money to finance infrastructure projects, like roads and bridges.

Yet there's a big problem with this "new and improved" version...

What (or Who) Trump's Corporate Tax Cuts Forgot

"Something is better than nothing... But I don't actually like the sound of this [tax plan]," said Money Morning Capital Wave Strategist Shah Gilani on FOX Business' "Varney & Co." today (April 19).

Shah is a distinguished "traders' trader" and 30-year market veteran who has been following the actions of the new administration closely. "This doesn't make any sense to me," said Shah. "This president has been wallowing in miscommunication with his own administration and with the public, and he needs to fix that. I think the way to do that is to cut personal taxes."

Whether individuals stand to win or lose from Trump's tax overhaul, there's one stock out there that's going to win big...

The Opportunity for Investors

When asked by FOX Business about whether the Trump corporate tax cut plan would definitely be replaced by the repatriation proposal, a White House spokeswoman said "all options are on the table."

And on his campaign trail, Trump floated the same idea his team is suggesting now -- a reduction in the federal tax that corporations would have to pay if they brought their stashed cash home, from 35% down to a flat 10%.

And if that happens, Apple Inc. (Nasdaq: AAPL) would likely bring a monstrous amount of cash back home.

You see, repatriation means bringing back cash that U.S. companies have parked overseas, and no other company on the face of the earth has more cash stashed than Apple, according to Shah.

"What would they do with almost $200 billion in cash back here, when they're generating more and more every day? They could spend it on a special dividend. They could raise their regular dividend payment. They could announce another massive share buyback program. Or they could do all three.

The company's effective tax rate as of 2016 was 26.1%. This shows that, after expenses, deductions, and credits, Apple's not paying the top rate anyway. Still, a reduction down to 15% would be a huge boon to the bottom line."

And where would that money go? To shareholders.

You see, corporate tax cuts and repatriation would generate a tsunami of cash for Apple. And as the stock price moves, it could keep floating Apple's share price higher and higher.

You Know What Happens Next... Some of the biggest investors in the world are quietly moving money into a fast-growing sector. Warren Buffett is in for $15 billion and has another $15 billion waiting for the right moment. Bill Gates is fully on board with billions on the line. When that kind of money moves in early, you know there are fortunes to be made. See where the big money is headed right here.