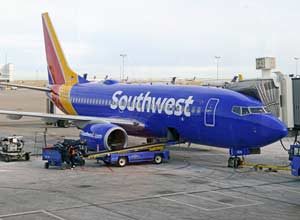 President Trump announced that he wouldn't terminate the North American Free Trade Agreement (NAFTA) with Canada and Mexico, but would like to renegotiate the agreement. This move eases fears of a potential trade war with Canada and/or Mexico.

Yesterday, the likelihood of a June rate hike increased to 73.6%. If today's economic data is strong, that probability will increase. The one exception to an increased probability of a rate hike is if the government is shut down at the end of the day tomorrow.

Southwest Airlines stock is down 3.5% in early morning trading after posting a disappointing earnings report.

Revenue increased from $4.83 billion for the same quarter last year to $4.88 billion this year. However, that increase of 1.2% failed to meet analysts' expectations of $4.93 billion in revenue.

Weight Watchers stock is up 7.6% in early morning trading after announcing it has a new CEO.

The new CEO of Weight Watchers is Mindy Grossman. She has been the CEO of HSN since August 2008.

Grossman will also replace Chambers on Weight Watchers' board of directors.

Under Armour stock is up 8% in early morning trading after posting its earnings report.

The athletic apparel company posted losses of $0.01 per share for the quarter, which is down from a profit of $0.04 per share last year. Despite the decline in profitability, the company still beat expectations for a loss of $0.04 per share.

Sales beat expectations. The company announced sales of $1.12 billion, while expectations were $1.11 billion. This is up from $1.05 billion in sales for the same quarter last year.