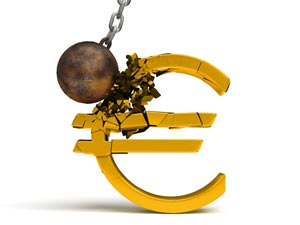 In the latest Greek debt news, there will be no bailout deal for the country after Eurozone finance ministers failed to reach a deal yesterday (Monday). While this is sparking concerns that a Greek default and "Grexit" could lead to a global stock market crash, we've actually uncovered a major new profit play.

While a Grexit is possible without bailout funds, we think the more likely scenario will be a last-minute deal for Greece.

Regardless of the outcome, we've found a way to profit from the uneasiness in the Eurozone that has caused the euro to drop 0.5% so far today and could cause it to fall much further...

What Led to the Greek Bailout Deal Impasse?

Greece receiving the next installment of bailout funds seemed like a done deal a few weeks ago.

The bailout review ended with a deal on May 2. The deal, if approved by the EU finance ministers, would have released €7.1 billion ($7.5 billion) in bailout funds to Greece in exchange for more pension cuts, liberating the energy sector, and increasing the tax base.

Just 10 days later (May 12), the International Monetary Fund (IMF) said it didn't support the deal because there was no debt relief plan.

Here's where things get really strange. Germany insists the IMF must back the bailout funds, while simultaneously rejecting the IMF's wishes to hammer out a debt relief plan for Greece. That's a big reason why there was no deal this week, despite passing the necessary reforms to release the funds on May 17.

Because the EU finance ministers were unable to reach a deal for Greece in conjunction with the IMF, the next opportunity for Greece to get the much-needed bailout funds is June 15.

Without the bailout funds, Greece can't pay its debts in July. This would result in a default, which could potentially push Greece out of the EU...

Will Greece Leave the EU?

Greece will likely default on the European Central Bank (ECB) in July. The country will owe the ECB €3.9 billion ($4.4 billion) out of the nearly €6 billion ($6.7 billion) in debt payments for the month.

It's likely the ECB will stop funding Greek banks once a default occurs.

If that happens, Greece is out of the euro because banks would not have the liquidity they need, and the government would not be able to print money to stabilize the banks. Leaving the euro would allow Greece the authority to print money as needed in order to prop up the country's banking system.

Money Morning Capital Wave Strategist Shah Gilani told readers on April 19, "There won't be a market in the world that won't crash" if Greece is forced to leave the Eurozone.

However, a default doesn't necessarily mean the country will have to leave the euro. The decision will ultimately be made by the ECB, which has a vested interest in keeping Greece in the euro, even in the event of a default.

The ECB backed the banks buying Greek debt. Without eventual repayment of that debt, the banks would potentially become insolvent, according to Shah. The 2008 financial crisis was triggered by banks becoming insolvent due to bad (mortgage) debt, so the ECB will do everything it can to protect the European banks. This includes continuing to prop up Greek banks to keep it in the Eurozone.

All of this assumes a default - which is not as likely as it appears. Despite this week's news, it's still more likely Greece will get bailout funds on June 15, narrowly averting a default.

You see, Germany has an economy based on exports and needs the single-currency market to buy its goods. Exports make up 46.8% of the German GDP, according to World Bank, while the world averages 29.5% of GDP comprised of exports. Therefore, Germany will make sure there is a deal for Greece in the nick of time to keep the Eurozone together.

While a deal is all but certain, investors see it very differently. The euro has already dropped 0.4% on the news that there will not be a deal for Greece. That sets up a great way to profit from the present uncertainty in the Eurozone...

2 Ways to Profit from Eurozone Uncertainty