Every four years, the American Society of Civil Engineers issues a "Report Card" for infrastructure. 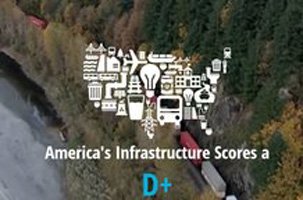 The report card gives letter grades to the condition and performance of America's infrastructure - its roads, bridges, waterways, etc.

And this year, America earned a collective letter grade of "D+".

It's as bad as it sounds. According to the American Society of Civil Engineers' website, a "D+" grade represents infrastructure that is "in poor to fair condition and mostly below standard, with many elements approaching the end of their service life."

Additionally, "condition and capacity are of serious concern with a strong risk of failure."

This almost-failing grade is unacceptable.

Money Morning Chief Investment Strategist Keith Fitz-Gerald attributes our crumbling infrastructure to a refusal to move past companies and technologies that ought to be extinct. "We simply do not need Jurassic Park-like infrastructure in America," he said on April 12.

Yet "prehistoric" infrastructure seems to be the norm in our country - just look at this video...