When asked by CNN's Alisyn Camerota if he was comfortable using $1.6 billion – not from Mexico, but from the American people – to pay for the wall, King responded: 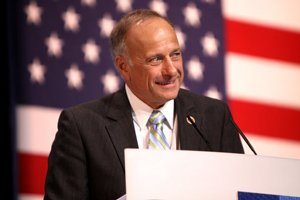 "Absolutely yes, and more. I'd throw another five billion on the pile, and I would find half of a billion dollars of that right out of Planned Parenthood's budget!"

The rest, however, would be drawn from a program over 45.4 million people depend on…

You see, according to King, many American families on SNAP don't need the federal aid at all.

"The rest of [the money] could come out of food stamps and the entitlements that are being spread out for the people that haven't worked in three generations," said King.

He also argued that because food stamps were created to fight malnutrition in America, and the nation now suffers from an obesity crisis, the program is counterproductive.

"Now we have a problem of obesity," he said. "And when you match up the [electronic benefit transfer] card with what the scales say on some of the folks, I think it's worth looking at. [Former First Lady] Michelle Obama looked at it, Republicans should be able to look at it too."

And that's not all — check out the video below for the rest of King's statement:

How Much Would Trump's Solar Panel Wall Cost – and Who Will Pay?

These Congressmen Want You to Pay for Their Second Homes

Trump's Budget Plan Will Cut $800 Billion from These Medicaid Programs

Mexico labour is not the problem and further to the stupidity of the "Wall " consider that Mexico is a land of 120 million and half are under the age of 35, these people are consumers ? Period, consumers!
The USA is a manufacturing country who better to sell to than close neighbours! Unless of course you want to make America Great ? .

AND WHILE MR KING IS DREAMING UP ALL THESE IDEAS FOR THE WALL…….I SUGGEST HE ALSO INCLUDE HIS PAYCHECKS THAT THE TAXPAYERS PAY FOR,TOO! THAT'S PUTTING THE MONEY WHERE YOUR MOUTH IS!!!!!!!!!!!!!!!!!!

I agree 100%. Most recipient are able to work but they are lazy.

you may have a point about lazy , however there are a lot of folks out there who are working , and can't make enough money to feed them self or families.
I have always wondered why as a people we pay our representatives so much for so little return , why not pay them what ever the going rate in their area is ? this way it might open some of their eyes as to why people , honest , hard working people need help . and lets take away all of those heath benefits , and government perks…pentions , health , statious that hasn't been earned lets say to get these you must first serve out at least two terms , at that your people will have shown that they are willing to foot the bill for you . hey king remember your name is not your title!!!!!!