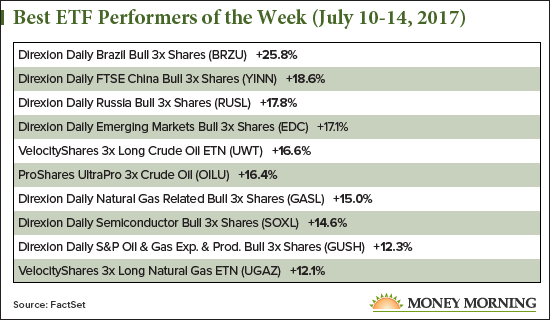 The top three on our best ETF* performers of the week all represent the "BRIC" countries – Brazil, Russia, India, and China.

You can check out Money Morning's recent report on how to profit from the emerging market boom with just "a few easy-to-take, easy-to-protect positions."

Oil and natural gas filled out most of the remainder of the list. Oil was up 5.2% for the week, and natural gas was up 4.1%. VelocityShares 3x Long Crude Oil ETN (NYSE Arca: UWT) rode that rise to a 16.6% gain, and ProShares UltraPro 3x Crude Oil (NYSE Arca: OILU) was up 16.4%. Direxion Daily Natural Related Bull 3x Shares (NYSE Arca: GASL) and VelocityShares 3x Long Natural Gas ETN (NYSE Arca: UGAZ) were up 15% and 12.1%, respectively. Direxion Daily S&P Oil & Gas Exp. & Prod. Bull 3x Shares (NYSE Arca: GUSH) benefited from both fuels' rise to close the week with a 12.3% gain.

To find out how to cash in on energy investments this year, check out Money Morning Global Energy Strategist Dr. Kent Moors' bold oil price forecast for 2017.

Direxion Daily Semiconductor Bull 3x Shares (NYSE Arca: SOXL) was the only repeat winner, following the previous week's 5.4% rise with a 14.6% gain last week. SEMICON West, a major trade show for the semiconductor industry, was held in San Francisco from Tuesday through Thursday.

*ETFs have a primary listing on a U.S. exchange and an average daily trading volume over 100,000. Data and analytics provided by FactSet.

Don't Miss: This investing strategy has delivered 217 double- and triple-digit peak-gain winners since 2011. And you can get access for just pennies a day. Learn more…