However, that 53.05% gain is just the start of how high the price of Bitcoin can climb… 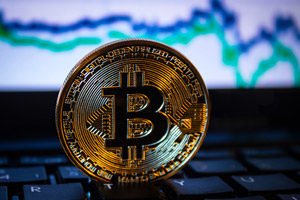 By 2027, the Bitcoin price could reach $1 million – and it's actually not as far-fetched as you may think…

They believe Bitcoin could account for as much as 50% of the world's non-cash transactions by 2030. The duo calculated that would mean that by 2030 the average Bitcoin trader would hold $25,000 worth of the digital currency.

They also project the number of Bitcoin users will climb from 6.5 million to 400 million during the same time.

Editor's Note: An incredibly rare gold anomaly is shaping up in the markets as we speak – one that has occurred ONLY twice in the past 20 years. And it's about to happen again. Details here…

Dividing the market cap by the amount of Bitcoin being held places Bitcoin prices at $500,000.

But that number may be too conservative…

In this free and exclusive report, Money Morning Cryptocurrency Expert David Zeiler details why Bitcoin prices could reach $1 million. And once you read this report, you'll see why a $1 million Bitcoin price prediction isn't as crazy as it may seem.

You can access this free and exclusive cryptocurrency report right here.