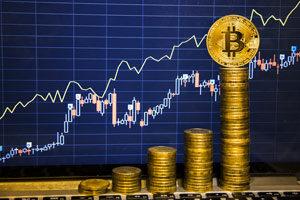 Also pushing the price higher was the news that institutional investors and professional traders continue to pour capital into the industry's largest crypto-trading platforms. Coinbase recently raised $100 million at a $1.6 billion valuation thanks to its recognizable presence in the cryptocurrency market.

On the day, the total market capitalization of the global cryptocurrency market topped $138 billion, a new record.

Below is a recap of cryptocurrency prices at 4 p.m. EDT

The price of Bitcoin rocketed past $4,300 and added more than $800 over the weekend after a long battle of software rules reached a temporary resolution.

The previous software rules - set back in 2009 - only made it possible for roughly five transactions to be processed per second. But following the fork - which saw Bitcoin split and Bitcoin Cash emerge - Bitcoin has risen significantly in value.

After Bitcoin topped $4,300, the market experienced a small sell-off as investors took some profits off the table.

That affected Bitcoin Cash, which has seen a number of owners sell off their BCH since the hard fork on Aug. 1.

The Ethereum price dipped and then rose slightly over the last 24 hours. The cryptocurrency, which is more flexible and has more programmable features than its chief rival, has been unable to keep up with Bitcoin's massive rally.

Bitcoin is up more than 106% over the last month, compared to Ethereum's gains of roughly 70%.

The Top 5 Cryptocurrencies to Invest In Today

Both of these currencies have seen increased buying momentum, as traders aim to use them to buy into initial coin offerings (ICOs).

NEO prices are off more than 3.2% over the last 24 hours, but owners of NEO are still happy with their gains so far in 2017.

In the last two weeks, the price of NEO has rallied more than 500%. There is a lot of optimism around this coin and its network, as the company aims to become the "Ethereum of China."