The price of gold closed out the month of August with a strong rally last week following North Korea's most provocative missile test of the year. Gold climbed 4.3% last month and posted a weekly gain of 2.5% between the Friday, Aug. 25, close and the Friday, Sept. 1, close.

On Monday, Aug. 28, North Korea launched a missile that crossed directly over Japan before falling into the sea. This was the first North Korean missile test to cross Japanese territory since 2009, and it was enough to push investors to buy safe-haven gold throughout the rest of the week.

The gold price today (Tuesday, Sept. 5) is up another 0.7% to $1,339 following yet another North Korean weapons test on Sunday. This time, the country tested a hydrogen bomb that was considered to be the most powerful nuclear test to date.

On top of North Korea's fear-inducing weapons tests, stalling jobs gains and a looming debt ceiling have also lifted gold. It's becoming clear from last week's rally that the price of gold established a floor at the $1,210 low seen on July 7.

That being said, gold's tremendous run higher hasn't taken a breath. A short-term pullback at this juncture wouldn't be a surprise.

But in the long run, I'm still overwhelmingly bullish. That's why I'm going to show you exactly where I see the gold price heading before the end of 2017.

Price of Gold Gains 2.5% to a Near One-Year High Last Week

After settling at $1,298 on Friday, Sept. 25, gold opened higher on Monday, Aug. 28, after reports emerged that North Korea had fired a missile over Japan. This pushed gold prices steadily higher throughout the session to close the day at $1,315 - up 1.3% from the Sept. 25 settlement.

Wednesday was marked by gold volatility as the U.S. Dollar Index (DXY) climbed toward the 93 level. This dragged gold lower throughout the day, eventually closing down 0.4% at $1,314.

Here's a look at the DXY's performance over the last five sessions... 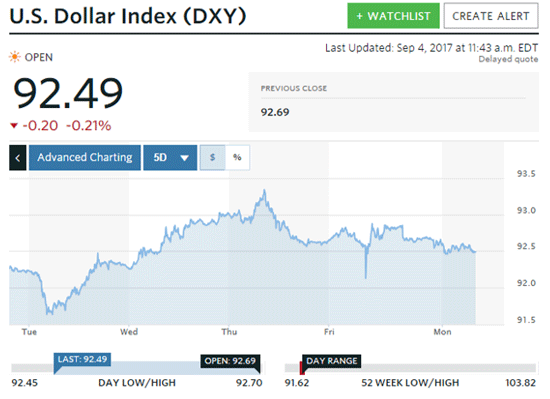 The price of gold kicked off September on a strong note thanks to the dollar's volatility. The DXY briefly dropped 30 points from 92.52 to 92.22 that morning, which pushed gold higher. It climbed 0.6% to close at $1,330. With that, the metal also posted a weekly gain of 2.5%.

Gold prices today (Tuesday, Sept. 5) opened higher following the Labor Day holiday and North Korea's hydrogen bomb test Sunday. The test has dragged the Dow Jones 0.8% lower today while investors moved their money into gold as a hedge against volatility. Gold is up 0.7% and trading at $1,339.

After last week's exceptional 2.5% gain, investors want to know what to expect the rest of the year. With a leader as unpredictable and volatile as Kim Jong Un, it's hard to say how North Korea's conflict with Japan and the United States will impact the gold price moving forward.

However, there are some underlying fundamentals in the gold market that I think will boost the metal toward my bullish price target this year.

My Bullish Target for the Price of Gold in 2017