The silver price has been looking extremely bullish the past two weeks.

But first, I expect we'll see the price of silver retreat from here in the short term. A pullback following a 14.4% rally in just two months would be healthy at this juncture.

In fact, I think we have already seen a start to this move, as a possible bounce for the U.S. dollar may be in the cards. The U.S. Dollar Index (DXY) - which tracks the dollar against other currencies like the yen and the euro - is already up from 91.35 to 92.07 today (Tuesday, Sept. 12).

Trending: Want to Retire at 60? Here's Your Action Plan

A strong contrarian signal has emerged suggesting the dollar could be due for a near-term rally. If that happens, the silver price could face some temporary headwinds before resuming its climb higher (I'll show you my exact silver price prediction in just a moment).

Let's look at some of the technical indicators pointing to a possible short-term price consolidation, as well as the indicators suggesting silver's long-term bull market has plenty more life.

After closing at $17.82 on Friday, Sept. 1, silver climbed higher on Tuesday, Sept. 5, after the Labor Day holiday and North Korea's hydrogen bomb test. The test was reportedly the most powerful yet, which sent investors piling into safe-haven silver. The metal added 0.7% on the day to close at $17.94.

Silver started Wednesday off mostly flat, as the DXY traded in the 92.25 range. But the price of silver trended lower from there, eventually settling at $17.91 for a 0.2% loss.

Here's a closer look at the dollar's action last week... 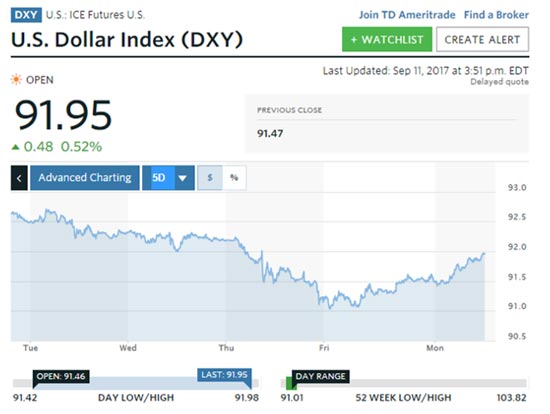 On Friday, Sept. 8, the silver price opened higher at $18.16 as the dollar fell toward the 91 level. But a DXY relief rally boosted it back to 91.50, which pulled silver lower throughout the day. The price of silver managed to close at $18.12 - the same close as the previous session. That marked a weekly gain of 1.7%.

Yesterday (Monday, Sept. 11), silver prices fell as the dollar kept climbing to flirt with the 92 level. The metal started the day sharply lower at $17.72 and eventually recovered to $17.90 by the close. However, that was still a 1.2% decline from Friday's settlement.

The silver price today increased slightly from yesterday's loss, up 0.1% and trading at $17.92.

But a brief pullback from here would be healthy for the metal and would likely set silver prices up for a continued run higher through the end of the year.

Here's my silver price prediction for the rest of 2017...

Just need to keep up with silver prices.