Bitcoin prices today dropped despite news that the world's most famous vampire squid is considering a migration into Bitcoin trading in the future.

The Wall Street Journal reported that Goldman Sachs is exploring a new trading operation that would be dedicated to the crypto space. WSJ reports that the bank's exploration into the space is in the early stages and that it might not proceed with development of a trading desk. 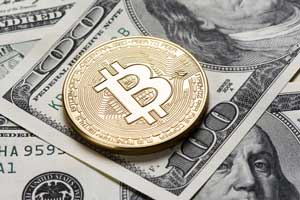 However, it's clear that many people on Wall Street see the space as a possible moneymaker in the future.

On Tuesday, the total market capitalization of the global cryptocurrency sector hit $144.5 billion.

Bitcoin prices slumped despite a vote of confidence by BlackRock CEO Larry Fink. The executive said that he believed in the potential of Bitcoin and other cryptocurrencies at his firm's Fixed Income ETF conference in Manhattan.

Fink also said he believed that the sector would help identify just how significant the global money-laundering problem is around the world.

It was surprising that the Goldman rumor didn't help propel Bitcoin prices higher. But the lack of the bump is a sign that the markets likely do not anticipate Goldman will jump into the space with both feet.

Not only would the firm face increased regulatory scrutiny, but it is unclear if there would be significant institutional demand for the company's services in the space just yet. That said, the story is a welcome departure from recent developments in South Korea and China, where both governments moved to ban initial coin offerings and further regulate the space.

The Ethereum price remained below $300 as the broader cryptocurrency market contracted.

The downturn came despite optimistic statements from IMF Managing Director Christine Lagarde over the weekend.

Litecoin Hovers Above $51 per Token

The price of Litecoin was off more than 3% as the markets shifted away from safe-haven assets that include gold, silver, and... yes... cryptocurrencies.

As we noted earlier today, Amazon.com Inc. (Nasdaq: AMZN) has received a petition to begin accepting Bitcoin and Litecoin as a form of payment.

The petition now has more than 10,000 signatures.

Blockchain remains a critical point of development for governments around the globe. This week, the U.S. Treasury Department reported that it is launching a new pilot program designed around distributed ledger asset tracking.

The agency is testing a tracking program of physical assets like cell phones, computers, and other agency property. The goal is to determine how blockchain can help the government manage its finances.