Although the silver price is down 1.8% over the last week, silver could be on the verge of another bull run…

In fact, a quick comparison of silver and gold charts in October will show you that silver's actually done better than its richer cousin.

One reason for silver's outperformance is its industrial and consumer demand, the latter of which has steadily risen over the last three months. The U.S. Mint reported 11,000 one-ounce Silver Eagle coins have been sold this month. That's up 37.5% from 8,000 in September and up 69.2% from 6,500 in August.

Meanwhile, silver stocks have dropped after a recent uptrend, with the Global X Silver Miners ETF (NYSE Arca: SIL) down 3.8% in the last two weeks. But silver miners technically may have formed a bullish pattern portending a possible near-term rally.

As news of Trump's tax plan continues to push the Dow Jones higher, money and attention are being sucked away from silver. Still, I think silver prices are forming a bottom in sentiment that could be setting the stage for their next bull run.

Before I show you my high silver price target for the end of December, here's a recap of silver's decline over the last week…

Silver started last Tuesday, Oct. 24, on a weak note despite the U.S. Dollar Index (DXY) – which measures the dollar against the euro and other currencies – also declining.

Since silver is priced in the dollar, a decline in the currency typically lifts silver prices, since the metal becomes cheaper for users of other currencies. This often boosts demand and therefore boosts prices.

This unusual pattern of silver falling alongside the dollar continued into Wednesday. As the DXY fell from 93.77 to 93.71, the silver price tumbled to $16.92 by the close. That marked a 0.3% loss for the day.

Thursday saw the pattern break as the dollar rocketed while silver prices plunged. The DXY surged from 93.71 to 94.61 – the highest settlement since July 19. The metal responded with a 0.7% drop, closing the day at $16.81.

Here's the DXY's performance over the last week… 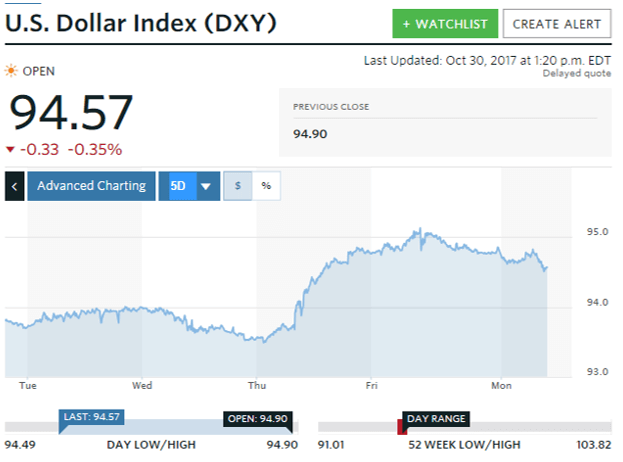 The rallying dollar has dominated silver's movement this year. Despite its unstoppable rally from 91.35 to 94.60 since September, the DXY is set to top out soon, likely in the 96-97 range, as I mentioned in this week's gold update.

My Silver Price Prediction for the Rest of 2017

Like to know how to make some money.
Retired.
A neophyte to investing.
Is bitcon, or similar item, worth looking at?
Don't have much extra cash.
Thanx

It's Monday morning here in sunny Arizona Peter and I'd like to see your comment on a question;
I have often wondered how the relationship of Silver to Gold is affected by our weakening dollar. Silver is almost a by-product of other mining efforts like copper, etc., and I've seen some experts claim that for every ounce of mined Gold there may be a yield of 15 ounces of Silver, yet the the every day pricing seems to be nearer to indicate a pricing ratio of 75 / 1 or there abouts.
What am I missing ?