President Donald Trump left for his 12-day diplomatic trip to Asia last Friday (Nov. 3) with 29 CEOs and corporate leaders from America's most powerful firms either by his side or prepared to meet him across the Pacific. 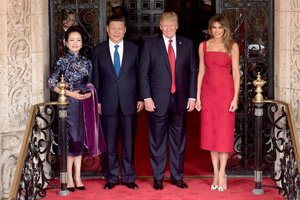 These CEOs serve a strategic purpose for President Trump - one that will actually have less to do with international business and trade and more to do with quashing North Korea's nuclear ambitions.

You see, we expect to see these 29 CEOs and corporate leaders leveraging increased commerce with China as a "pot sweetener" in exchange for one thing, and one thing only...

Chinese President Xi Jinping's compliance in stopping the Hermit Dynasty once and for all.

Arguably the most important portion of Trump's Asia trip will take place on Wednesday (Nov. 8).

That's when he'll be meeting with President Xi - leader of the United States' largest trading partner.

Over the past few months, President Trump has (re)ratcheted up his rhetoric about the U.S.-China trade deficit - which was, at last count, $309 billion in 2016.

In fact, just last week, Trump brought the contentious issue up once again...

"We have trade deficits with China that are through the roof. They're so big and so bad that it's embarrassing saying what the number is," said Trump, according to The Financial Times.

Indeed, trade between the two countries will be a major talking point between Xi and Trump this week, but North Korea will be the most pressing issue.

And Trump will use the one problem to fix the other with the 29 CEOs by his side...

The 29 CEOs are all "prepared to announce 'done deals' to export products to China," reported CNBC this morning.

Given that the CEOs of Boeing, Cheniere Energy (NYSE: LNG), Texas LNG Brownville, DowDuPont (NYSE: DWDP), and the U.S. Soybean Export Council are in attendance, we expect these upcoming "done deals" to allow Beijing's businesses to purchase stakes in and export products from American energy and farm institutions, as well as aircraft and other machinery. 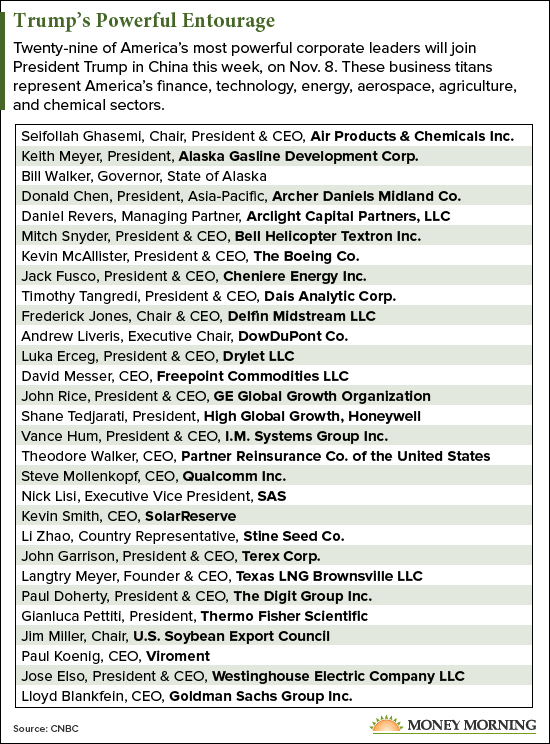 That's where Trump will strike with his "Art of the Deal" finesse, in what Voice of America News referred to on Nov. 2 as a strategy of "linking the world's most complex relationship - ties between the United States and China - with the world's most difficult problem - North Korea."

It will be a basic "quid pro quo" between the United States and China this week - one that will require Xi to at least promise to pressure Pyongyang even harder in the immediate future. In exchange for doing so, his country will have access to the various carrots that will be dangled before its eyes by Trump's 29-business titan squad.

Xi will have to follow through on what he promises as well, which hasn't always been Beijing's strong suit...

While China issued one banking directive prohibiting joint China-North Korea business ventures on Aug. 26, and another prohibiting financial transactions with North Koreans on Sept. 21, it's still too early to assess whether those directives have been strictly and meaningfully enforced.

For instance, as the BBC reported on Oct. 10, North Korea may not receive funds from China's financial institutions, but it still receives large sums of cash designated as "foreign aid" that researchers could not verify was actually used as such by Pyongyang.

Meanwhile, Xi's government has failed to follow through on a big promise it made earlier this year - one that's keeping Pyongyang's lights on...

According to the UN on Sept. 26, China imported $182 million of North Korean coal in August and September this year - despite its February pledge to stop the practice altogether. (To stay informed on China's collusion with North Korea, sign up for real-time alerts sent to your inbox, completely free, here.)

So, it stands to reason that we can't count on China to keep its word on any promises about North Korea this week.

That's why these CEOs are Trump's ace in the hole. No follow-through on Xi's part could see those "done deals" with the 29 American CEOs all but nixed - which is not what the Chinese leader wants right now.

Xi is, after all, intent on solidifying China's global status as an economic rival to the United States. He boasted as much in his Oct. 17 speech to the nation just before his reelection. That's when he outlined his short- and long-term goals for the country - to be a technologically innovative world-powerhouse by 2022 and to be the top influencer of global economics by 2050.

But first, China must help rein in North Korea... for good.

If anyone can do it, Trump can with aid of American smart patriots and business leaders. He is trying to save the world from a nuclear war that will turn us all into survivors from hell. Never has America faced such terrible world problems.Thank You, Trump and company and go to it. Sandra Fleming

….And once again we play right into China's hand. This is what they wanted from us all along in their masterful game of chess. By not stopping N. Korea's nuclear ambitions, China has used our fear to give them our 29 best technology firm's industrial might. You just watch how they milk this until every last technological advantage is reverse engineered or stolen or manufactured there instead costing us jobs and transferring our influence and wealth. Have we not learned anything yet of their deceptive business practices? What does western industry have to show in their home turf? Have they opened their doors to USA or other western imports ? It is outrageous what our CEO's see that they can accomplish there instead of in a capitalist friendly country.