Hedge fund manager Mark Yusko has attracted a lot of attention for his long-term Bitcoin price prediction of $1 million, a stark contrast to the attacks coming from other corners of Wall Street. 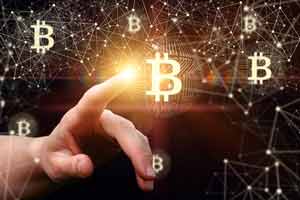 A month later, Yusko responded to a question asking for a Bitcoin price target. He simply tweeted, "$1,000,000 (long-term)."

The tweets show Yusko sees a $1 million Bitcoin price prediction as a "best case" and $500,000 Bitcoin price as a "conservative base case," both over a time frame of 10-plus years.

But Yusko has remained adamant. The reasons he cited on Twitter for the big Bitcoin gains he's predicting are "store of value," "gold equivalence," and "network effect."

The first two are fairly straightforward, but the network effect is particularly compelling in the case of Bitcoin.

It's the basis not just for Yusko's optimism, but a number of Bitcoin price predictions…

A Bitcoin Price Prediction Based on Users

It's more formally known as Metcalfe's Law. It was named after Robert Metcalfe, who co-invented the Ethernet networking protocol. The law states that the value of a communications network grows exponentially as more users connect to it.

The idea is that the utility of the network increases exponentially as the number of people connected to it grows.

This was demonstrated with the original telephone system. Having a phone in the house was of limited use in communicating with others when few people owned them, but indispensable once nearly everyone had one.

FundStrat co-founder Tom Lee has applied an adaptation of Metcalfe's Law to Bitcoin that puts the digital currency in a range between $20,000 and $55,000 in five years.

Tim Peterson, the founder of and portfolio manager for Cane Island Alternative Advisors, wrote a blog post in September in which he showed how the trajectories of Facebook and Bitcoin have followed Metcalfe's Law. 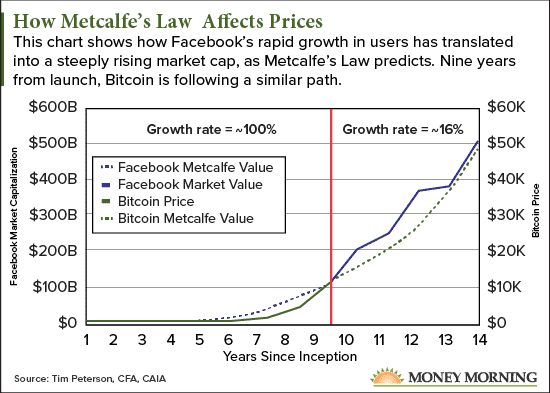 The chart shows the path of both Facebook and Bitcoin from inception, with Facebook five years farther along. Should Bitcoin follow Metcalfe's Law as Peterson envisions, the Bitcoin price will reach $20,000 in 2019 and $48,000 in 2022.

It's also important to remember that projections based on Metcalfe's Law depend on user adoption, not time.

And Bitcoin is at a very, very early stage when it comes to user adoption…

Why the Bitcoin Price Will Go Parabolic When It Goes Mainstream

I ready to learn and earn with you!

Love to learn more, thanks. Nancy

Excellent article. I would like to know more and see how I can profit from it.

So you want to know why I think the Money Pro's are all wrong when it comes to Projecting Bitcoins' value in the Next 10 years…. ? And infact will be 10x HIGHER…!
Because the closest Business law or market projection principal anywhere close to predicting a financial movement like this is the McCalfes Law…. (read the entire article) but the only Exponential growth case study we have to base it on is the Facebook phenomenon…. which will give you an Extremely conservative 10 year evaluation for the obvious X factor that I haven't heard any Financial Pro talk about…is that adoption of service is what brings the system it's value…and your comparing Apple's to Oranges here…. Bitcoin is not a community where people can share theor stupid Ducklip selfies or what their about to shove in their pie whole…. this is a world wide platform where anyone can transfer their "CAPITAL" in and almost instantly earn "Capital Gains" higher than in any 401k or IRA or even one of the Best Top performing Blue Chip Mutual funds…!!! C'mon guys…once this hits main stream… it's Gonna go Viral Bigger and Faster than any of your most Favorite stupid Cat videos or worldstar fighing clip….! Why….? Because GREED IS THE MOST POWERFUL MOTIVATION IN THE WORLD….! PERIOD….! And nobody in there right mind is going to NOT INVEST IN BITCOIN…..! So the question is Not if you will invest in Bitcoin….the question is WHEN WILL YOU….. AND SOONER IS ALWAYS BETTER THAN LATER…… !!

I really hope you bought bitcoin

I will love to learn more about investment and make money with you .

Yes, I’m on pins and needles waiting for the program