A Bitcoin price prediction of $55,000 for as early 2022 suggests it’s not too late to buy despite the cryptocurrency’s steep 350% gains this year.

The Bitcoin price has hit several all-time highs in recent weeks. It happened most recently on Wednesday, when price of Bitcoin touched $4,522.13. As of midday today (Friday), the BTC price was hovering around $4,300.

Typically investors looking at that kind of parabolic rise assume they’ve missed the lion’s share of profits to be had.

But that’s not the case with Bitcoin...

Likening Bitcoin to the Internet

While Bitcoin has delivered monster returns since it was launched in 2009 – rising from fractions of a penny to thousands of dollars – it’s still at a very early stage. 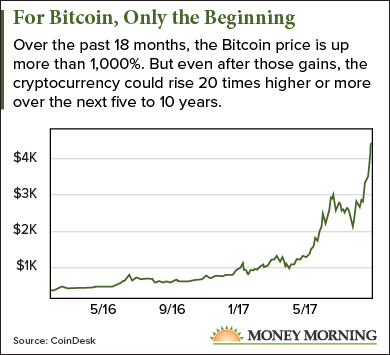 “It looks to me as though we are at the same point in the adoption curve as we were in 1995, when we went from 1 million Internet users to 10 million,” Ronnie Moas of Standpoint Research told Money Morning. “The following year, the Netscape browser came online and we went from 10 million users to hundreds of millions of users overnight.”

That sort of thinking echoes what Bitcoin enthusiasts like venture capitalist Marc Andreessen have been saying at least since 2014.

And now that Wall Street stock analysts like Moas are thinking this way – and making the kind of stratospheric Bitcoin price predictions once heard only from devoted Bitcoin users – it’s starting to sink in that these forecasts could prove correct.

Last year, we saw several Wall Street analysts take stabs at a Bitcoin price prediction. Needham & Co. set a target of $2,231 by 2020 last September. At the time, with the Bitcoin price at about $600, it sounded ambitious. Of course, Bitcoin is worth nearly twice that forecast today.

Take Moas, for instance. In late July, he released a 122-page report on cryptocurrencies in which he made a Bitcoin price prediction of $50,000 by 2027. 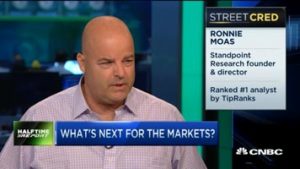 His rationale for such huge gains is that Bitcoin today still has a very small number of users despite all the hype surrounding it.

“I expect that within a couple of years we will have between 50 million and 100 million cryptocurrency users - up from approximately 10 million today. We only have 0.15% market penetration right now - if that goes to 2% or 3%, we will get to the $50,000 price target that I set at the beginning of July,” Moas said.

Unlike most other analysts, Moas sees opportunity within the larger cryptocurrency space. His report discusses the potentials of Ethereum and Litecoin as well as Bitcoin.

He believes that 1% of the $200 trillion invested in stocks, bonds, and gold today will move into cryptocurrencies over the next decade. That’s 14 times the current total market cap of all cryptocurrencies, $144 billion.

Moas also spends many pages of his report cautioning investors of the risks of cryptocurrencies. Here at Money Morning, we advise readers not to invest any money into cryptocurrencies that they can’t afford to lose.

On the other hand, investing a small portion of your portfolio into Bitcoin and other top cryptocurrencies is a no-brainer when you’re looking at potential returns of 1,000% or more.