After being stuck in the $50 range for most of October, Litecoin prices have now nearly doubled heading into December 2017.

Today, Litecoin prices were up 2.43%, and the altcoin now has a market cap of $5 billion. 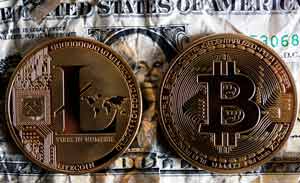 While Litecoin investors wait for prices to reach $100, the rest of the cryptocurrency world is focusing on what's next for Bitcoin.

The price of Bitcoin surpassed $10,000 today as the wave of optimism over the cryptocurrency market fueled another day of heavy trading volumes.

The most bullish prediction of the day comes from billionaire Mike Novogratz, who said Bitcoin could "easily" hit $40,000 in 2018.

Novogratz has argued that cryptocurrencies will soon experience a wave of investment from the institutional level.

Below is a recap of the top cryptocurrency prices at 11:30 a.m. EST

Ahead of next month's introduction of CME Bitcoin futures, traders are speculating on just how high the price can go in the year ahead.

While Novogratz has predicted a possibility of $40,000, Ronnie Moas, of Standpoint Research, is a bit more conservative, with a $14,000 price target.

Yesterday, we noted that some rumors had emerged about Bitcoin and Tesla Inc. (Nasdaq: TSLA) CEO Elon Musk.

Around the corners of the Internet, some people have speculated that Musk was the inventor of Bitcoin after a former SpaceX employee said the Tesla executive was "probably" Satoshi Nakamoto.

However, Musk has now dispelled those rumors on Twitter. He went on to say that a friend had sent him a fraction of a Bitcoin a few years ago.

However, Musk now doesn't know where his Bitcoin is. Luckily for him, the visionary CEO isn't hurting for money.

The Ethereum price pulled back from its recent all-time high as capital turned back to Bitcoin.

The price has rallied in recent days since Novogratz predicted that Ethereum would hit $500 by the end of the year.

Bitcoin Gold has benefited from the remarkable jump in the price of Bitcoin over the last week.

But the run to record levels looks to be losing steam. The one-month-old cryptocurrency has emerged as the fifth-largest by market capitalization.

Concerns remain around the support from the Bitcoin Gold community and whether the spin-off will be able to attract investors.