A lot of passive investors are missing out on life-changing gains.

They believe it's impossible to beat the markets, so they've latched onto exchange-traded funds and mutual funds tracking the S&P 500, and they're grinning ear to ear because their easy, simple strategy has brought them 16.06% gains in just one year.

But they're missing out, because there's a way to get more than 600 times those gains on average - with the same minimal effort.

Passive Investing Has Never Been This Lucrative

Money Morning Chief Investment Strategist Keith Fitz-Gerald has developed an investing strategy that is just as easy as pouring your money into a passive investment and showed itself, in October, to be an average of 612 times more lucrative.

He calls it the "accelerator trading strategy," and so far this year, his "accelerator" trade recommendations averaged 127% total gains per week, including partial closeouts. Just this past October, Keith showed readers an average of 313% weekly gains.

And following Keith's recommendations is just as easy as investing in the S&P - which, by the way, would have given you a measly $110 profit in the same time frame.

And when the markets finally turn?

Those passive investors will watch years of growth evaporate before their eyes; but Keith's strategy could easily be producing more and more triple-digit gains.

See for yourself how easy these massive windfalls can be...

All You Need to Do Is Look for the "X"

Keith's strategy is simple: Buy at the first "X," sell at the second.

The Xs on this chart represent the momentum of money moving in and out of a stock. 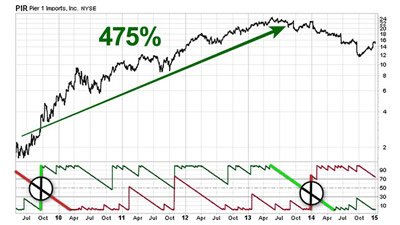 No emotion. No guesswork. Just profits.

Check out Keith's recent win on Maxim Integrated Products Inc. (NYSE: MXIM). His charts showed the telltale X way back on May 8, and he recommended a long play shortly thereafter.

Other investors were thrown off when Maxim issued $500 million in senior notes; the stock tumbled over 10% in less than a month. And when Maxim missed on revenue in July, the stock shot down 5.5% in one day, as trigger happy investors took their money and ran.

But Keith kept his eye on the X, and stayed vigilant.

And this strategy also works when stocks are on their way down, too.

On Sept. 1, Keith saw a red X on his charts, indicating that Sears Holding Corp. (NYSE: SHLD) was headed for yet another round of misery. Later that month, he recommended a put option on the struggling retailer.

Although we at Money Morning have known for years that Sears is on its way to the morgue, many on Wall Street are touting that the once-great retail giant can be revived. As Keith told readers on Sept. 14, "company execs and a good many Wall Street analysts would have you believe that Sears is going to turn around."

Whether they think brick-and-mortar retail is somehow still relevant, or they actually believe in Eddie Lampert's abilities as a CEO, investors who listened to those analysts back in September have seen their shares lose nearly half of their value.

Keith, on the other hand, showed readers yet another 100% gain on just one leg of his recommendation within two months by following the X and betting against Sears.

Take a look at Diebold Nixdorf Inc. (NYSE: DBD). It's no secret that Diebold, which is in the ATM business, is finding itself less and less relevant in our increasingly cashless society.

Had you shorted Diebold three years ago, you would have just now doubled your money. That's a long wait and a lot of extra risk. After all, shorting stocks opens you up to unlimited downside and requires nerves of steel. Would you have held on when DBD shot up 27% in two weeks in 2015? Or when it jumped 49% in a few months earlier this year? It's impossible to say.

Compare that nightmarish three-year play to Keith's accelerator trade recommendation. Keith saw the red X for Diebold on Oct. 20 of this year and recommended a put option against the ATM company on Nov. 8.

Just one week later, readers who followed that recommendation pocketed another 100% gain.

Obviously, those are all past gains. And Keith isn't promising that he'll replicate those gains in the future.

He's promising to do better.

Our Readers Rave About Keith Fitz-Gerald

"The best service I have ever seen. Thank you." ~ Wayne L.

In fact, Keith is betting $9.75 million that he will show readers 350% weekly gains on average for a year, including partial plays.

If he doesn't, he'll work for free.

Keith's readers are already getting the chance to see average gains like this right now because of these simple "Xs," and we don't want you to miss out.

Click here to learn how to get everything you need to start following this research yourself.

How do I buy that stock?