Because Intel's chips are used in nearly every application, from personal laptops to cloud serves, these vulnerabilities are going to be catalysts for cybersecurity companies who can fix the glitch. And in a bit, we'll reveal our three top cybersecurity stocks poised to profit from this massive vulnerability.

Intel commands a dominant 81.2% share of the central processing unit (CPU) market, according to cpubenchmark.net.

According to pcworld.com, basically every Intel processor released since 1995 has these vulnerabilities. 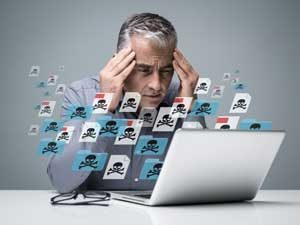 Meltdown also happens to be the more destructive exploit. That's why all major tech companies, like Alphabet Inc. (Nasdaq: GOOG) and Amazon.com Inc. (Nasdaq: AMZN), are racing to patch their systems to protect against Meltdown as fast as possible.

Because of Intel's 81.2% market share, almost every computer, as well as every single Apple Inc. (Nasdaq: AAPL) Macbook, are vulnerable as a result of these bugs.

And there are only two possible solutions for affected devices.

Individual users will be at the lowest risk of being hacked and can probably just patch their devices with minimal performance losses.

FREE PROFIT ALERTS: Get real-time recommendations on the best cybersecurity stock opportunities the moment we release them. Just sign up here, it's completely free...

Businesses, on the other hand, are at the greatest security and financial risk. Companies unable to take a performance hit and unable to afford to replace their Intel CPUs will have to depend more heavily on cybersecurity companies.

As a result, this security flaw will be a major growth driver for cybersecurity stocks in 2018. It's important to get into these stocks as soon as possible, before traders fully digest the widespread impact of Intel's chip vulnerability.

Now that we've explained the extent of the vulnerability, here's the first cybersecurity stock positioned to profit...

Having large corporations and government agencies as customers will be a boon for VRNS shares in 2018. These larger and more mature organizations tend to have significantly older computer systems than younger companies.

Tech giants like Alphabet and Amazon, which are in the cutting-edge, cloud-based server business, will be able to move quickly to patch their system to protect against Spectre and Meltdown bugs.

Government agencies and older firms like ADP run on much older computer systems. They continue to do this because it's cheaper than overhauling their systems.

And we all know government processes already move at a snail's pace, so they won't be able to afford performance losses. Therefore, they will be forced to rely more heavily on Varonis for security.

Even with its strong performance so far this year, VRNS shares still have room to grow. The 11 firms covering the company have an average price target of $53.73, with a high target of $60, according to S&P Capital IQ. From current levels, this represents near-term upside of 4.23% and 16.4%, respectively.

But the stock's upside could be even greater now that this wave of bugs is forcing its clients to beef up their security.

The next company on this list was visiting the region this attack took place in just two days before it was reported...

These measures will allow companies to bolster their systems' weakest points, which are the points where humans interact with them.

CYBR shares have fallen 14% over the last 12 months, from $48.44 to $41.67, but have rebounded from August's low of $40. This drop came as a result of weak earnings results compared to 2016, caused by some difficulty closing new deals in Europe.

However, investors are optimistic that this is a temporary setback, and that means you can buy in at a discount.

According to S&P Capital IQ, the 18 analysts covering CyberArk are still bullish on the company, with an average price target of $50.40 and a high target of $57. This represents upside from current levels of 20.95% and 36.79%, respectively.

The next cybersecurity stock on this list has performed even better than CYBR and is one of the industry's top performers...