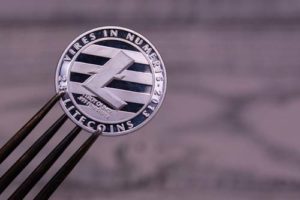 The upcoming fork is promising Litecoin holders at block 1,371,111 a bounty of "Litecoin Cash" during the hard fork. Each LTC will receive 10 LCC, according to the group behind the fork.

But LTC holders are also excited about a new payment system...

Litepay will give users the capacity to "spend dollars anywhere debit cards are accepted, or withdraw cash from any compatible ATM," according to Litecoin's website.

The company said that it built the infrastructure for its own payment system after Bitpay refused to accept LTC.

Below is a recap of the top cryptocurrency prices at 10:30 a.m. EST.

On Wednesday, the market capitalization of the global cryptocurrency sector hit $449.44 billion.

Bitcoin represented 34.8% of the total cryptocurrency market, with a market capitalization of $156.1 billion.

The price of Bitcoin pushed back above the key resistance level of $9,000 as traders lessened their fear about a cryptocurrency ban in South Korea.

It has been a little more than a month since South Korean officials announced the possibility of a complete ban on cryptocurrencies.

That spurred a dramatic sell-off.

Microsoft Corp. (Nasdaq: MSFT) also offered a boost to the global cryptocurrency market today with the announcement that it will embrace blockchain technology to improve security challenges and identity confusion.

It was the hottest cryptocurrency in the market on Monday, surging more than 100%.

That pushed the little-known cryptocurrency into the top 25 by market capitalization.

But today, some investors are paying the price for the "pump."

Are You Paying Your Bitcoin Taxes?

Finally, the IRS is going to have a lot of questions for Bitcoin traders in 2018 and beyond.

Last year, the agency won a dramatic court case that will require Coinbase to turn over records of users with more than $20,000 in transactions for tax purposes.

It is likely that the IRS is going to audit a number of people who have not reported profits from Bitcoin and other crypto trading in the past.

But the IRS may seek even more oversight in the future due to the growing trend of tax evasion.

According to data from Credit Karma, roughly 250,000 people have already paid their taxes using the company's software.

However, fewer than 100 of those people have declared gains or losses from cryptocurrencies.

The sheer sample size indicates a potential misunderstanding of tax law, or it's possible that large single trades are not that frequent, making the number of taxable events smaller than many analysts had expected.