Just think about it… 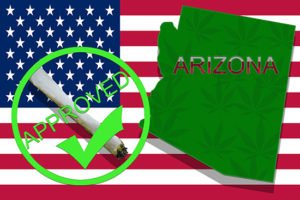 Demand is going to skyrocket when anyone 18 or older is able to buy marijuana legally.

Dispensaries can sell more to consumers.

Security firms, consultation services, and creative entrepreneurs will also cash in on their niches within the cannabis industry.

Folks, the money carousel will just keep spinning. The only question to ask yourself is if you want to be a part of the $24.5 billion profit opportunity or sit on the sidelines.

That's why today, as a service to Money Morning readers, I tapped into my contacts in the cannabis industry to help uncover which states could legalize marijuana next. That will help you profit by getting in early.

These aren't bloggers in their parent's basement making wild guesses.

These are directors, presidents, and CEOs at the forefront of the cannabis industry.

My contacts identified three states where legalization is likely next, including their top state for legalization to hit next.

And the next state that could legalize recreational marijuana just missed out on passing legalization during the 2016 elections, with 48.68% in favor of it…

Arizona seems like a solid bet, with full legalization almost happening in 2016, but this next expert has a more surprising prediction…

Jack Rein is the national services director at Acology Inc. (OTCMKTS: ACOL), a global design, manufacturing, branding, and sales company that developed The Medtainer, which allows patients to store, grind, and pour a variety of medications.

Rein told me that of the states considering legalization, Delaware is the most likely candidate to change its laws.

And while Ralston and Rein may have different predictions, there were two other experts who agreed that this could be the next state to legalize recreational marijuana…

I want to subscribe but not sure. How and and what platform will i do trading

I knew that this was going to be a great stock a long time ago. Told my family it was the one to invest in.

What is your thought on the cultivation of pot in Canada, possibly exceeding the demand since there are so many suppliers? For persons getting into the MJ stocks at the beginning of this year, when will the CA MJ stocks begin to see the gains and is this type investment to be held for long term? Are there some international regulations that could affect the recreational legalization of pot in Canada, thus impacting stock prices negatively?

Are we still holding onto GBLX, CANN, TRTC? I havent heard anything?