The best blockchain stocks to buy in 2018 are not upstart IPOs or opportunistic companies that simply added the word "blockchain" to their name last year. 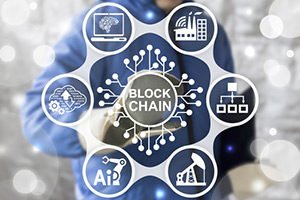 But those aren't the only two we'll bring you today. In fact, we have five of the best blockchain stocks you can buy now.

These companies are harnessing blockchain technology to create real-world solutions for existing problems. They realize the vast opportunity that lies before them and would rather lead than be left behind.

Blockchain is the technology that underpins cryptocurrencies like Bitcoin. It's a shared digital ledger that verifies and stores all transactions on a network.

And the applications for blockchain technology span far beyond cryptos...

Why Blockchain Tech Is a Gold Mine

In a 2015 survey of 800 information and communications executives and experts, more than half - 57.9% - said they believed 10% of the world's gross domestic product will be stored on the blockchain by 2027. That's the equivalent of more than $10 trillion.

What does that mean for blockchain businesses? Wintergreen Research estimates the market for blockchain products and services will explode from $708 million last year to $60.7 billion by 2024.

"Blockchain is one of the bright sectors in technology," Roger Kay, president of Endpoint Technologies Associates Inc., told Bloomberg. "Since blockchain infrastructure is fairly beefy, there will be a large pool of revenue associated with sales of equipment, software, and related services for blockchain installations."

Here are just a few of the things businesses can do with blockchain technology, as compiled by Oracle:

And earlier this month, UnitedHealth Group Inc. (NYSE: UNH) and Humana Inc. (NYSE: HUM) launched a pilot program to use blockchain tech to share data across healthcare organizations, with the goal of improving data accuracy and access to care.

And these five companies are at the forefront of this coming blockchain boom...

Blockchain tech can play an especially important role in feeding the growth of Microsoft's Azure business, as it makes the service a better value. And Azure has been key to MSFT's recent success, posting year-over-year quarterly growth rates of between 90% and 120% for the past two years. Morgan Stanley recently made a forecast that Microsoft could increase its Azure revenue from $3.9 billion in 2017 to $21.6 billion as soon as 2020. Money Morning Chief Investment Strategist Keith Fitz-Gerald thinks Microsoft will be the first company to hit a $1 trillion market cap. That would put the MSFT price at about $130 a share, a 39% gain from the current price of $93.50. Microsoft also has a dividend yield of 1.8%.

Bank of America is otherwise a solid company, with its stock up more than 30% over the past 12 months. Looking ahead, the bank stands to benefit from the U.S. Federal Reserve's ongoing interest rate hikes as well as the recent changes to the tax code. According to FactSet, earnings per share (EPS) are expected to double by 2020. Current price: $30. BAC has a dividend yield of 1.58%.

Another reason to like JD is that it has been gaining market share - increasing to 33% as of Q2 2017, compared to just 17.7% in 2014. Quarterly revenue has been increasing by about 40% year over year. And the company just started to turn a profit, which now is expected to accelerate. On a price-to-sales basis, JD is undervalued, at just 1.01, compared to Alibaba's 12.5 and Amazon.com Inc.'s (Nasdaq: AMZN) 3.91. The current price is $40.

IBM is just starting to realize significant revenue from its blockchain initiatives. But that will ramp up dramatically over the next two years, adding between $10 billion to $18 billion to the top line. This should push the IBM stock price back up to $200 and beyond by 2020 to 2021. The current price is $157.50. The IBM dividend yield is a juicy 3.80%.

But while these are all good plays, one blockchain stock to buy stands above the rest...

This Is the Top Blockchain Stock to Buy for 2018

This is not useful research. I am looking for new companies that will utilize this technology and become the NEXT Microsoft.

Agree with Ray Sandbek. I don't have time for videos, and promptly forget anything valuable they may include. I need to read something, and maybe reread it a time or two. So when I see a video with no transcript, I just hit delete anymore. A waste of my time. Same for audios.

Video is great, but more MM should also always include a link to the transcript so visitors can read the presentation.

I agree. I don't have time to listen to hours of presentations. Please let me read it.