Investors are anxiously awaiting a SpaceX IPO, and now there's even more hype around Elon Musk's company because of a $290 million government contract.

SpaceX will produce a launch vehicle and provide support services for a U.S. Air Force satellite, according to GovconWire.com. The contract will last through 2020. 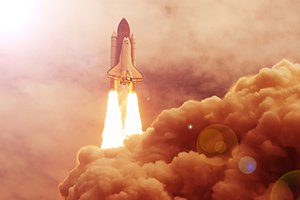 And because of all the excitement, Money Morning readers are asking us, "When can I buy SpaceX stock?"

Unfortunately for anxious investors, there's not going to be a SpaceX IPO anytime soon. But that doesn't mean you can't profit from SpaceX right now…

Why the SpaceX IPO May Never Happen

In an e-mail sent to Reuters in May 2017, SpaceX President Gwynne Shotwell said that any rumors about SpaceX preparing for a public offering were "not true."

In fact, there may never be a chance to buy SpaceX stock.

But investors may still get a chance to own a stake in the company.

Here's how that could work…

There could be a SpaceX merger through Tesla Inc. (Nasdaq: TSLA), making Tesla a backdoor investment strategy for profiting from SpaceX.

IPO Goldmine! The biggest IPO in human history is about to take place. It's expected to create $2 trillion in new wealth. And we've found a backdoor way for you to make a fortune from it. You could even cash out before the IPO ever happens. Details here.

An analyst at Morgan Stanley believes SpaceX may eventually merge with Tesla, according to a Dec. 5, 2017, Business Insider report.

A merger would provide Tesla with SpaceX's $1 billion worth of assets and company cash.

It would also save Musk from running two publicly traded companies, which is something he doesn't want to do.

During an appearance at Vanity Fair's New Establishment Summit in 2015, Musk said that he wouldn't recommend being the CEO of two publicly traded companies because it "really decreases your freedom quite a lot."

And Tesla is already a company we recommend here at Money Morning. But while investors might be waiting for the SpaceX IPO, the world's biggest IPO is coming soon…