China's solar industry is already the world's largest, but its future growth potential is simply staggering.

It's a moneymaking opportunity you'll rarely ever see again.

But there's no time to wait. The country's renewable energy growth is simply happening too quickly to not act now.

To help you get in on this profit windfall, we're showing you the best China solar stock to own right now.

Before we reveal that stock pick, here's exactly why China's renewable energy industry is potentially so lucrative…

How China Will Dominate the World in Solar Energy

In 2016, China created its most recent five-year economic plan, and it set a goal of producing 105 gigawatts of solar energy by 2020.

This was an ambitious goal. China would need to increase solar energy production by 45% per year for each of the five years. 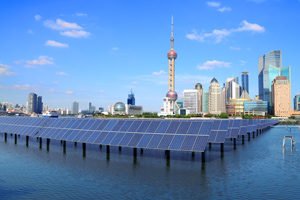 But China didn't meet its goal.

By 2017, China was producing 112 gigawatts of solar generated electricity, 7% over its 2020 goal and four years early.

According to Frank Haugwitz, Director of the Asia Europe Clean Energy (Solar) Advisory (AECEA), China increased its distributed solar segment by an astounding 217% in the first quarter.

And that's what China's already done.

Why China's Solar Future Is a Profit-Making Machine

The country has pledged to spend an additional $360 billion on renewable energy over the next two years. The AECEA also predicts that China could install between 40 and 45 GW of solar capacity in 2018 alone.

But the real catalyst behind China's explosive solar growth potential is its efforts to replace coal as an energy source.

Coal currently fuels 59% of China's electricity, and its pollution is creating an air-quality crisis in the country. But solar power produces no pollution. Plus, it doesn't require the heavy machinery and manpower to extract it.

And if China is able to replace just a fraction of its coal-powered electricity with solar, the growth potential will be off the charts…

China consumes roughly 5.9 kWh of electricity annually, which is the most in the world. This is 50% more than the 3.9 kWh used in the United States. That means China's efforts to grow solar power will have huge payoffs.

Solar power generates 5% of China's electricity right now, compared to coal's 59%. But if solar power is able to replace just half of coal's output, the solar industry will have to grow an incredible amount.

According to Wood Mackenzie, China solar generation is expected to grow 700% or more by 2035.

This growth creates a staggering profit potential for investors who know how to harness this potential.