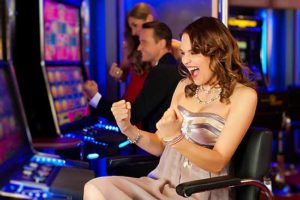 It was a monumental event in the wake of New Jersey's decision to legalize sports gambling. It's also a sign of just how quickly states - and casinos - are acting to take advantage of the Supreme Court's decision.

It's also setting off a firestorm of speculation on the best sports-gambling stocks to buy.

And MGM Resorts International (NYSE: MGM), which owns the New Jersey casino, rose quickly to the top of a crowded field of existing and speculative players, and for good reason.

It currently has a Money Morning VQScore™ of 4, the top score a stock can receive.

Wall Street agrees. According to TipRanks.com, the stock is rated a moderate buy, with a price target of $40.50. That price represents roughly 32% upside from today's current levels of $30.58.

But you can make even more money...

While MGM is in our "Buy Zone" as a great long-term investment and a way to profit from legalized gambling, there's an even better way to ride MGM for even bigger profits.

I'm not talking about buying options or some other exotic trading strategy.

I'm talking about making monster gains by buying shares in one company on MGM's radar.

And by following MGM's money, you could net a quick 100% return in just months...

The MGM Acquisition that Could Lead to a 100% Profits

A Supreme Court's 6-3 ruling in May struck down the 1992 federal law that banned sports gambling in most U.S. states.

Fifteen other states have already introduced bills to get in on the action and gain a new stream of tax revenue.

This is going to be a massive profit opportunity based on the conversations I've had with analysts and politicians on the issue.

But it's not as easy as just opening the doors to new sports-betting customers.

In order for companies to dominate the gambling industry, one thing is going to be critical in the years ahead.

Scale is vital to capturing market share in this emerging industry.

You see, a larger betting audience provides casino operations with a better view of odds and spreads on events.

Casinos make money off the "vig," which is the amount it charges to make a bet.

Oddsmakers want minimal exposure to being wrong and having to pay out bets.

By having more data on how people are betting, as well as on the potential outcomes and payouts, it can set the betting structure even tighter to minimize losses and maximize profits.

That means organic growth isn't going to be the pathway to profitability.

Instead, the existing gambling titans will look to swallow up smaller players and capture their markets.

And we want to locate the undervalued assets that are easy targets for acquisition... and significant profit opportunities for us.

With tax reform as a major tailwind for the industry, larger gambling operations have more cash on hand and access to additional capital to engage in mergers and acquisitions in the year ahead.

U.K.-based online gambling operation Paddy Power Betfair was the first company to strike, in May, with a 61% stake in fantasy sports operator FanDuel.

But MGM stands out because of its recent purchase of Empire City Casino and Yonkers Raceway, an $850 million deal that will seek to capitalize on potential sports and other forms of gambling just 15 minutes from the heart of Manhattan.

And looking ahead to its next deal, I wouldn't be surprised to see MGM snap up another company on the cheap given its attractive valuation and existing audience.

Here's the Real Way to Get Rich from Sports Gambling