China is ramping up its war propaganda to its citizens. In an emotional two-minute video released last week, China's People's Liberation Army underscored the personal sacrifice of the nation's army while displaying its latest weaponry that could levy its foes.

The video was released as part of the nation's Army Day and features a moment when the narrator says, "peace behind me, war in front of me." 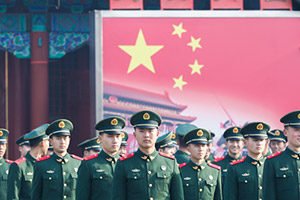 According to Eric Wertheim, a naval expert with the U.S. Naval Institute, China is aggressively aiming to build a fleet of aircraft carriers that could rival the United States' Nimitz-class carriers.

Of course, China isn't the only threat to global economic and world order.

Let's look at the other list of stories that suggest confrontation may be on the horizon:

With so much uncertainly around the world, now is a very good time to invest in U.S. defense stocks.

In addition to providing solid incomes and guaranteed revenue from the world's strongest military on earth, defense stocks continue to perform strongly despite the threat of global economic downturns or societal breakdown.

Based on all of these stories, let's look at the top defense stocks to own in August 2018.

Defense Stock to Own, No. 2: Ducommun Inc.

Our first defense stock to own is aerospace and defense giant Ducommun Inc. (NYSE: DCO).

The defense contractor manufactures components used in commercial, military, and space aircraft. This list includes popular vehicles like the Boeing 737 NG and 777 airliners, the C-17 heavy lift cargo plane, the Apache, Chinook, and Blackhawk helicopters, and the Space Shuttle.

With increasing demand, it regularly sees big orders from the U.S. military, NASA, the U.S. Department of Homeland Security, and a variety of other governmental agencies.

Defense Stock to Own, No. 1: Vectrus Inc.

The truth is that every… single… year… billions of dollars will be spent to keep the U.S. military strong enough to prevent terrorism.

It does everything from airfield and ammunition management to equipment maintenance and repair. It also offers IT services, including important cybersecurity and data-management systems.

It knows its market pretty well, since more than 35% of its 6,700 employees are former military.

It's one of the defense stocks that Money Morning Special Situation Strategist Tim Melvin profiled last week as a "Buy."

You can learn about another defense stock he likes right here.