PepsiCo Inc. (NASDAQ: PEP) and Coca-Cola Co. (NYSE: KO) have been in business for over 120 years, but if they want to say in business, they'll need to enter the cannabis market. 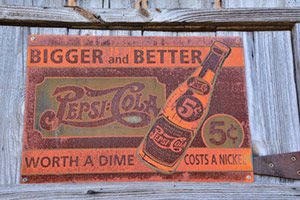 It's a good start, but it's not enough.

In order to bring in more revenue, attract more investors, and create market-beating gains, each company has to enter new markets.

That's why a cannabis beverage from Pepsi or Coke may hit the shelves sooner than you think...

CBD-Infused Drinks Are the Wave of the Future

Cannabidiol (CBD) is a compound found in the cannabis plant. It's believed to have anti-inflammatory properties and can help relieve stiffness and chronic pain.

And it's becoming popular in the health-conscious community, as athletes like UFC fighter Nate Diaz and NFL linebacker Derrick Morgan use CBD hemp oil to improve their athletic performance and overall health.

Unlike THC found in marijuana, CBD is not psychoactive, and it does not change a person's state of mind.

And Pepsi and Coke already have products that they could infuse with CBD...

But I believe Pepsi would be the first with a cannabis product because of its aggressive push into the health and wellness sector...

But its "good for you" line shows how progressive Pepsi has become. This line features Kevita kombucha, Sabra hummus, and Naked Juice.

With the health benefits of CBD and with U.S. CBD consumer sales reaching $1.15 billion by 2022, it only makes sense for Pepsi to create a CBD-infused beverage line.

Now, I don't expect Pepsi or Coke to jump into the marijuana market until all cannabis use is legal under federal law.

But it's spotting trends like this now that will lead investors to the largest long-term gains.

And when I spoke with cannabis expert Danny Brody, the VP of Investor Relations of The Green Organic Dutchman Holdings Ltd. (OTCMKTS: TGODF), he was also bullish on the cannabis-infused beverage market.

"It is no secret that we view the infused-beverage vertical as a major disruptor within the cannabis sector. We believe Constellation Brands Inc. (NYSE: STZ) and [its] large-scale investment into the industry is only the beginning. Soda sales are on the decline; beverage giants will be looking to diversify, de-risk, and enter this key market segment at an accelerated pace," Brody told me on Sept. 12.

You see, the times are a changing...

In a 2017 Gallup poll, 64% of Americans surveyed believed marijuana should be legalized.

Cannabis legalization is the will of the people.

And you can stake your claim right now in the $10 billion industry before it goes absolutely vertical...

How much richer could select cannabis stocks make YOU in the election year of 2018?

I love cannabis, 210% and growing
Keep the recommendations coming!!!!
Thanks
Tim Christensen

I believe that Cannabidiol or CBD) is a highly beneficial part of a cannabis plant. I agree with the anti-inflammatory properties of cannabis. It's no wonder that Coca-Cola wants to penetrate the cannabis market.

Cannabis has a wide opportunity in the industry world. Especially that it is legalized now. No wonder that coca-cola enter the cannabis world.