The best climate change stocks to buy are suddenly looking even better. 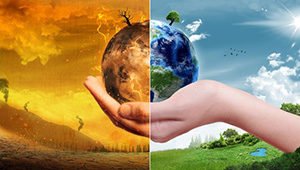 Last week's dire United Nations report dramatically ramped up the sense of urgency to fight climate change. The report, authored by the UN Intergovernmental Panel on Climate Change (IPCC), warned that time is running out to avoid the worst effects of climate change.

Even full implementation of the 2015 Paris Agreement won't be enough to avoid catastrophic damage to the environment, it said.

This makes climate change stocks - companies with technology and services aimed at mitigating the effects of climate change - an even stronger buy as money pours into their solutions.

The IPCC report warns the world will have to reduce carbon emissions by 40 to 50% by 2030 - just 12 years away - to avoid economic damages from lost productivity, health issues, and weather pattern changes that will run into the hundreds of billions of dollars.

The short timetable will encourage more spending in the short to medium term on low carbon technologies, boosting the profits of the companies that provide them. It's a shift that will benefit both the businesses and the environment.

Speaker Boehner: "We may turn a few heads." Click here to attend this first-of-its-kind online event on october 23rd.

"[Climate change] has gone from being an environmental problem that we have to deal with in order to minimize damage, to a driver of growth, innovation, and opportunity," Mark Kenber, the Chief Executive of UK-based Mongoose Energy and a 20-year veteran of the climate change economy, told Natural Capital Partners last November.

And this opportunity will be worth trillions of dollars...

This Market Could Grow to $1 Trillion per Year

From an investing standpoint, climate change represents a broad range of opportunities. It includes everything from renewable energy stocks to water stocks to companies that specialize in energy efficiency.

Estimates of the spending on climate change technology vary, but tend to run into the trillions of dollars.

In 2015, the Low Carbon Technology Partnerships initiative estimated that a serious, organized attempt to combat climate change would require the investment of between $5 trillion and $10 trillion over the next 12 years.

The International Energy Agency (IEA) has estimated the world will collectively need to spend an average of $1 trillion per year until 2050 on carbon emission reduction. For the past several years, investment has hovered around $400 billion - an increased sense of urgency will push spending up by hundreds of billions a year.

While governments and businesses have been reluctant to increase spending, they'll start to change their tune as it becomes apparent that investing in these solutions will be the cheaper alternative.

The IPCC report estimates the economic damage of the earth warming by 1.5 degrees Celsius by the end of the century at $54 trillion. If temperatures rise by 2 degrees over that span, the IPCC estimates the damages at $69 trillion.

Now let's take a look at the kinds of companies most likely to benefit from rising climate change spending...

Stocks to Buy as the World Invests in Climate Change

After a strong year in 2017, the solar sector has struggled this year in the wake of tariffs on imported panels imposed by U.S. President Donald Trump. But that means many solar stocks are bargains; over the long term, demand resulting from the need to transition from fossil fuels will drive prices much higher.

But while all of these stocks stand to prosper from an increasing global focus on climate change, we like two better than any I've mentioned so far. That's because both of these companies have earned the highest possible Money Morning Stock VQScore™.

That tells us they're the best climate change stocks to buy now...

Do you think the ETF MJ is a good take not only for Canada but the United States as well ? I’ve read that a lot of the stocks in the EFT operate in bothe countries.
TY John

Thanks for reading Money Morning. According to ETF.com, the MJ ETF has limited exposure to the US due to the federal ban on marijuana. I'm not so sure any of the Canadian companies are doing business in the US. That will only change when federal laws change. But the ETF does own a few medical marijuana stocks based in the US, such as Insys Therapeutics and Cara Therapeutics. It also owns UK-based GW Pharamceuticals, which is working toward getting a CBD-based drug approved in the US. MJ is not a bad choice for broad exposure to the growing marijuana market and is bound to enjoy nice gains over the next couple of years.