Jeff Sessions is one of the biggest opponents of marijuana legalization in the United States, and he used his authority as attorney general to stop cannabis reform at the federal level.

But he can't do that anymore. 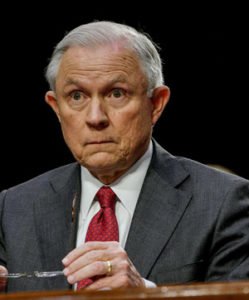 Jeff Sessions resigned today when U.S. President Donald Trump asked for his resignation. So fired is more like it.

And pot stocks are already surging. Tilray Inc. (NASDAQ: TLRY) popped more than 30% since the news broke that the man who said "good people don't smoke marijuana" was fired.

We're not surprised at all. We've already told you about the huge potential the midterm elections had for cannabis stocks. In fact, we had 36 reasons why it was the biggest day for cannabis in weeks.

The country's biggest cannabis foe can no longer use the U.S. Department of Justice to prosecute cannabis growers in states that legalized marijuana. He can't punish banks for accepting money from cannabis business. He can't threaten states planning to legalize marijuana.

It's possible the next attorney general could even be favorable toward marijuana legalization. After all, earlier this year, President Trump said he supports lifting the federal ban on marijuana. Now that the biggest marijuana critic in his administration is gone and Democrats have control of the House of Representatives, we might finally see it happen.

Look, billions of dollars are on the line. Fortune 500 companies and institutional investors are building massive war chests in the battle to dominate the U.S. cannabis market. This could bring monster profits to well-positioned investors.

It will make today's gains look like spare change.

Our analysts have already identified three cannabis companies that could potentially deliver a 1,000% windfall.

Go here to learn more before it's too late…