And one of our top renewable energy stocks to watch has gained 64% over the last six months. But, that's just the beginning.

This industry still has much further to grow. It's a bull market in the making.

That's why I want to share our five best renewable energy stocks with you, again, before they really take off.

You see, most forecasts for renewable energy have just been too modest. Many estimates fail to take three crucial developments into account.

First, wind and solar power costs have finally dropped below the cost of coal-fired power plants across much of the United States. 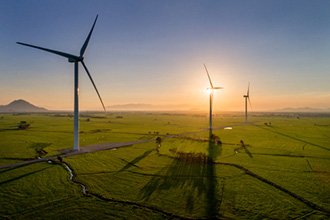 Second, technology is advancing so rapidly in related areas, like batteries, to increase energy storage. This will increase the power and sustainability of renewable energy.

The combination of these three factors suggests a bullish outlook for renewables.

And it's playing out right in front of us. Over time, we've written about how these five clean energy stocks will benefit from a global transition to renewables.

And they've only just begun to do that.

We're about to name - not one, not two - but five renewable energy stocks poised to benefit from the rapid growth in clean energy.

But first, here's why the renewable energy sector is ready for a boom.

Why to Invest in Renewable Energy

A recent presentation by NextEra Energy Inc. (NYSE: NEE), a clean energy stock we've talked up before, suggests that U.S. electricity consumption could be 50% renewable in just 11 years.

And NextEra is going to be providing a good portion of that.

You see, NextEra is a renewables stalwart in its own right. With nearly a century of history, and over 5 million customers, NEE knows electricity.

It's the world's largest generator of renewable energy from wind and sun. According to S&P Global Ratings, NEE gets a best-in-class ranking in its Environmental, Social, and Governance (ESG) Evaluation.

So, it stands to be a major winner in the budding clean energy market.

It's just a matter of waiting until the projections for the clean energy industry take form. And the outlook is still promising.

2019's NEO compares levelized costs of competing energy technologies. It found that for roughly two-thirds of the world, either wind or solar has become the cheapest option for additional power-generating capacity.

Their analysis also points to coal's supply of global energy falling to 12% by 2050. It's currently at 37%.

And he says that will "undercut electricity generated by existing coal and gas plants almost everywhere."

That means lowering production costs for solar power, which could exponentially grow demand for manufacturers.

Lightning advances in smart solar power systems will help efficiencies, which will bring costs further down and push demand much higher.

So, it's time to watch these clean energy stocks, especially when all of them are leaders in this key industry...