Investors won't know the winner of the presidential election until the votes are counted, but they can map out the best stocks to buy for each outcome.

Although the contest could go either way, right now it appears former U.S. Vice President Joseph Biden has the edge over U.S. President Donald Trump. 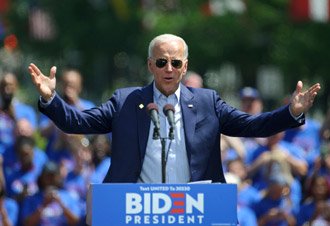 The political analysis website FiveThirtyEight currently gives the Democratic challenger a 71% chance if winning on Nov. 3. It simulates the election 40,000 times to get its forecast.

The RealClearPolitics website also has Biden prevailing over the Republican president. Its "No Toss-Up States" forecast map has Biden with 352 electoral votes to Trump's 186.

Whatever your politics may be, as an investor, it always pays to prepare for events that are likely to occur - like a Joe Biden presidency. (We've also done a story on the best stocks to buy if President Trump is reelected.)

A quick glance at Biden's policy positions shows his approach to taxes and Wall Street regulation are much different than Trump's. If he does win in November, the investing climate will change dramatically.

Today we'll take a look at:

If Biden Wins, Taxes Will Go Up

Biden's campaign has not been shy about proposing higher taxes - for individuals as well as corporations.

The Tax Foundation estimates that over a 10-year period, Biden's corporate tax proposals would slice 1.2% from GDP, reduce wages by 1%, and wipe out 236,000 full-time jobs.

Most of the proposed tax increases for individuals target the wealthy. Those making over $400,000 will see their top marginal rate rise to 39.6% from 37%. The estate tax exemption would drop from $11.58 million to $5.49 million. And those making more than $1 million will have their capital gains taxed at ordinary income rates.

Biden would eliminate the step-up in cost basis provision on inherited investments. This effectively wipes out any capital gains taxes on the investments.

So if your parent passes on a portfolio worth $100,000 and $75,000 of that is gains, you pay zero on those gains if you sell right away. (Your new cost basis is the date of the death of your parent - gains after that date are taxable as usual.)

This provision also covers family-owned businesses, already stressed by the COVID-19 pandemic. Children inheriting a farm or business might be forced to sell it to pay the taxes.

"That's a huge philosophical shift that minimizes the significance of family-owned business in America," Ric Edelman, founder of Edelman Financial Engines, told Barron's. "Historically, the step-up existed on the premise that wealth was embedded in small-business market value and farms.

But Biden's policy proposals extend far beyond tax reform. Among these proposals is where we'll find the potential winners and losers in a Biden administration.

Look for Stocks to Buy (and Avoid) in These Sectors

While the tax outlook isn't so great, a Biden victory would still create opportunities for investors.

Throughout the Democratic primaries, Biden defended the Affordable Care Act and resisted the Sen. Bernie Sanders (I-VT) demand for "Medicare for All." Expansion of Obamacare should generally benefit the healthcare sector, such as the insurers and hospitals.

But there's one exception: the drug makers.

Biden would end the exception that lets pharma companies avoid negotiating with Medicare on drug prices. Several other proposals would put limits on what drug makers can charge.

Biden has ambitious plans to spend up to $1 trillion on infrastructure. Road and bridge building would boost the industrial and materials sectors. Biden also favors spending on mass transit and railroads.

Spending on water infrastructure would rise as well. Water stocks have been a solid bet for years, and a Biden administration would bolster their investment case.

Which bring us to perhaps the biggest investing opportunity of a Biden presidency - climate change stocks.

Many may not realize Joe Biden is in fact a big fan of the Green New Deal. That's the wide-ranging climate change initiative popularized by Democrats of the progressive wing of the party such as Rep. Alexandria Ocasio-Cortez (D-NY).

"Biden believes the Green New Deal is a crucial framework for meeting the climate challenges we face," the candidate's official website says.

Green New Deal policies will favor utilities with a hand in wind and solar power generation as well as electric vehicle manufacturers.

At the same time, fossil fuel firms will get hit with tougher regulations. Companies in the coal, oil, and natural gas industries are in for more rough times under a Biden administration.

The Best Stocks to Buy for a Biden Presidency

Not surprisingly, Gilani says the best stocks to buy for a Biden presidency can be found in the former vice president's climate change agenda.

And he's got some great picks.

"One company that fits almost perfectly into everything the Green New Deal is about is Brookfield Renewable Partners LP (NYSE: BEP), Gilani said. "Brookfield owns and operates a portfolio of wind, solar, hydroelectric, and other green energy properties. It would be ideally positioned to profit from even a token government nod to renewable power."

"A hypothetical future Biden administration's 'green' tax credits and incentives would open up the way to even more growth there," Gilani said. "Nikola is a hydrogen-powered truck manufacturer that's right up there with Tesla in terms of investor interest."

Another sector Gilani sees benefiting from a Biden presidency is marijuana stocks.

His pick there is Canopy Growth Corp. (NYSE: CGC).

"A Biden win would be like rocket fuel for companies like Canopy Growth," Gilani said. "A huge segment of the Biden coalition backs full and complete marijuana legalization, and the Biden administration just might give it to them. Canopy is a leader in recreational and medicinal cannabis products in the United States, Canada, Germany, and the United Kingdom."

One thing to remember here is that Biden's ability to enact his policies depends heavily on the Democrats winning back the Senate in addition to holding their majority in the House (which they are expected to do).

A Republican Senate would block many of Biden's proposals.

Nevertheless, Gilani believes his picks will do well if Biden becomes president.

"Canopy and Nikola in particular are well below their 52-week highs, giving them plenty of room to run higher - a lot higher, should Biden take the White House," he said.

I think you were a little biased on Biden's tax and some of his other policies Dave. The truth is people like me, in elevated income categories will pay some more in taxes, but the average Joe(no pun intended) will come off much better. Most folks don't inherit a business anyway. You reference only the possible negative i.e. job losses from tax policy, which is questionable, depending on what "expert" you ask. However, his overall policies would create millions of new jobs. So just want provide a little clarity to the situation by pointing a more positive side of the outcome.

There is very little positive side to that outcome. Jobs definitely not among them. Major structural changes (not infrastructure) to our rights and freedoms. They will come up with new words for it…

if Biden wins I will buy Chinese stocks